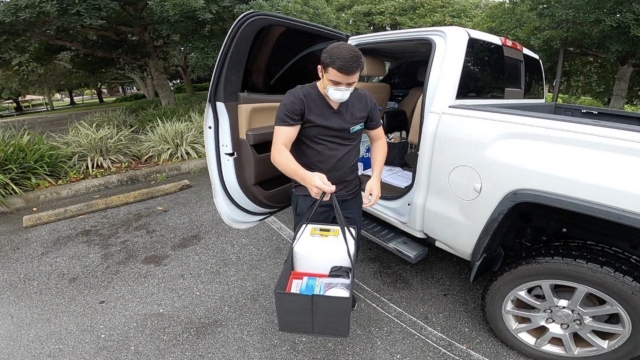 While more than half of U.S. counties have high levels of COVID-19 transmission, around a third of those eligible for a COVID-19 vaccine have yet to receive a dose, according to CDC data. Some health care providers are searching for new ways to reach them.

A Tampa-based pharmacy started delivering doses to homes this week, regardless of whether someone is homebound or a patient.

“We’re seeing a lot of individuals who are just really concerned and afraid of the Delta variant and catching it,” said William Parker, the owner of DeliveRxd Pharmacy, noting the reasons are across the board.

Parker said since announcing the program a week ago, their phones have been ringing non stop. So much so, they’re planning to hire more people per diem to expand the program. Right now, he said they’re administering about 30 doses a day with hundreds of people estimated in the queue.

“Most of them have been telling me they don’t have a way to get around,” said Ledsiel Garcia, a pharmacy technician making the deliveries.

He believes their effort will make a difference.

“I have family members that passed away because of COVID so I think this is very important everybody gets the vaccine,” Garcia said.

Michael Pyffer received his first dose as part of the program Thursday. He said he was waiting to see what happened with the vaccines. He said a neighbor who worries about him made him call.

“I was worried about everything, especially what they’re saying on the news I figured I better get it. ” Pyffer said. “Everybody I asked has it and you can see I’m in an older community so everybody’s kind of got one.”

CDC data shows about 70% of those eligible for the COVID19 vaccine have received at least one dose.

“Some places there’s fairly good uptake of vaccines and in a lot of places we’re starting to see new cases emerge and less vaccinations rate. So some of the states particularly in the Deep South seem to have lower vaccination rates than other places,” said Lois Privor-Dumm.

Privor-Dumm is a senior advisor with the International Vaccine Access Center, and part of the Johns Hopkins Bloomberg School of Public Health. Privor-Dumm pointed to herd immunity .

“And you know that’s going to require you know high 70’s, 80’s or even 90%. And it’s just not across the board in average. It’s that in every community because the virus will find those communities where you don’t have people vaccinated and that’s what we’re really worried about,” Privor-Dumm said.

A Kaiser Family Foundation survey released in June found 17% of unvaccinated adults said they’d be more likely to get vaccinated if a mobile clinic came to their neighborhood.

“At home vaccine delivery is happening in a lot of different places particularly where you have homebound people,” Privor-Dumm said. “But bringing it out to the broader population is a novel approach and that’s something that is ideal because the more convenient you can make it for somebody to get their vaccines the more comfortable they’ll feel and hopefully the more people that will get vaccinated.”

Pyffer is scheduled to receive his second dose next month.

“I didn’t want to be one of them people that were spreading it or anything like that so thought I’d do the right thing and just be on the safe side and get it, he said.