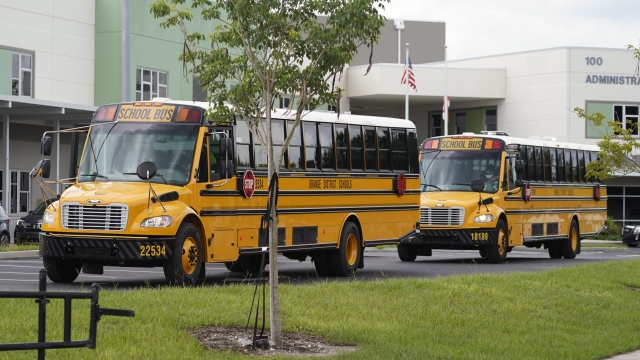 More than 8,000 students, 300 staff in Hillsborough county in isolation or quarantine.

A Florida school board is holding an emergency meeting to consider imposing a mask mandate as it deals with a massive surge in students who are isolating or quarantining because of COVID.

More than 8,000 students in Hillsborough County and over 300 staff members are either isolating because they tested positive or quarantining because of exposure to someone who did. The number of students impacted has jumped by almost 3-thousand since Monday.

Republican governor Ron DeSantis recently issued an order that bans schools from requiring masks. And two Florida school districts may lose funding for violating the governor's mask mandate ban. The state Board of Education voted to consider penalties for districts that require students to wear masks. Their parents can't opt-out.

Earlier this month Governor Ron DeSantis threatened to withhold hundreds of thousands of dollars from districts that didn't comply with the mandate ban.

Officials argued the districts should be investigated for ignoring the law.

"We have districts who are picking and choosing what laws they want to follow. That is in violation of the rule of law that makes this country great and special more than any other reason," said State's Education Commissioner Richard Corcoran.

DeSantis has repeatedly defended his order as giving parents the final say on masking — not districts.

But the latest CDC guidance says masks are best for safety and says it's best to use them inside schools.