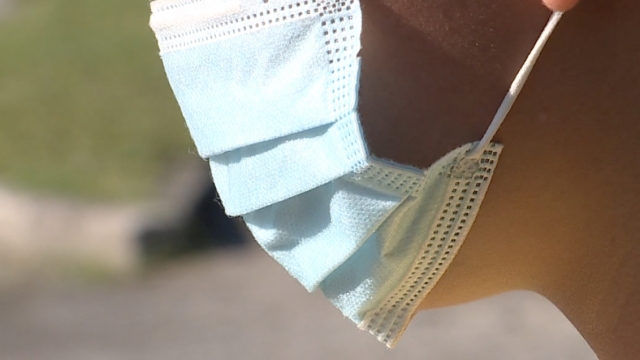 The U.S. Secretary of Education is monitoring the situation.

While kids are back in school across the country, mask policies in the classroom are in the crosshairs of challenges from parents, boards, courtrooms and state leaders.

The funding cut was announced the same day the Biden administration notified five other states it's investigating them for possible civil rights violations over their orders banning universal masking.

"We have positive cases that are really crippling the infrastructure that we need in order to have the amount of workforce and students directly in front of teachers," said Carlee Simon, Ph.D., the superintendent of Alachua County Public Schools, which covers the Gainesville area.

The Florida Department of Education is withholding monthly school board member salaries in Alachua and Broward County Public Schools over their mandates that do not allow parents to opt out of masking. Simon isn't backing down.

"It's moved from threat to actually action. So our legal team is helping us with navigating the next steps but I expect that will be soon that we start to take action," said Simon.

Before the ink dries on a court decision, the Florida Commissioner of Education notified other school systems, including districts in Palm Beach, Miami-Dade, Sarasota, Hillsborough and Orange Counties they were under investigation for non compliance and that if they didn't document compliance he’ll recommend withholding funds.

A Florida judge is expected to sign an order, though, blocking an executive order from Governor Ron DeSantis requiring parents be allowed to opt out of masking.

"If you look at the ruling—he’s basically saying the parents' bill of rights violates the school boards. But, in reality, the school boards weren't even party to the case. I think we’re going to have really good grounds to appeal," Governor DeSantis said.

The U.S. Secretary of Education is monitoring the situation.

Sec. Miguel Cardona tweeted: "Last week, a court blocked Florida's blanket ban on universal masking in schools. Districts in Florida & across the country should be implementing masking policies to keep students & educators safe. We've also reminded district leaders that federal pandemic relief funds can be used to cover any financial penalties imposed on them by the state as a result of local efforts to protect the health & safety of those on school grounds. We will continue to monitor this situation and stand with parents, students, and the hardworking educators & staff who are doing all they can to have a safe & healthy in-person school year."

The U.S. Department of Education notified five other states—Iowa, Oklahoma, South Carolina, Tennessee and Utah—its Office for Civil Rights has opened investigations looking into whether rules banning universal masking discriminate against students with disabilities at a higher risk from COVID-19.

"She's super excited to go every day and in the back of my head it’s, are we coming home with COVID today?," said Florida parent Shari Kopp.

Her daughter is in middle school, but not yet old enough to receive a vaccine. Kopp explained she feels like masks are the solution to keep kids in school and safe.

"It's not about civil rights or anything like that, it’s simply about being good to yourself and other people," Kopp said.

Others parents believe the choice should be in their hands.

"I sent my children back to school with the assumption that masks would be a parent's choice and I would not be comfortable with that changing at this point and my children would not be either," said Michelle Stille, a parent who has children ranging in age from voluntary pre-kindergarten to 10th grade.

Stille explained it's important to her for her son be able to see his teacher's face.

"I've not seen anything to show that that helps. All it really does is create difficulties for some children and it's a distraction in education and we just need to get back to educating our kids," Stille said.

The debate isn't over. It's playing out in courtrooms across the country, too.