The Case Of The 'Incredible Shrinking Airline Seat' Goes To Court 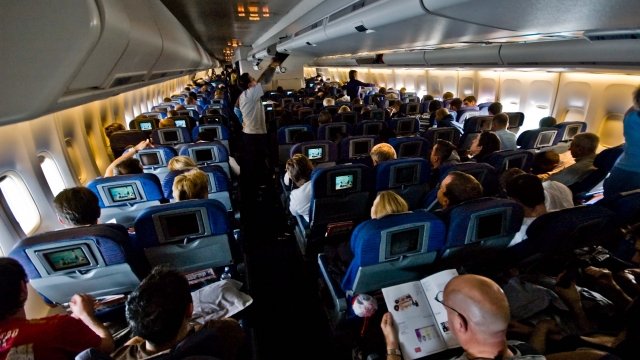 A U.S. appeals court reviewed whether or not the FAA should set size standards for passenger seats.

It's true. Passenger space on airplanes is shrinking — so much so that the issue went to court.

A U.S. appeals court took on the "Case of the Incredible Shrinking Airline Seat," which pits Flyers Rights — an advocacy group for airline passengers — against the Federal Aviation Administration.

Flyers Rights originally petitioned the FAA in 2015. The organization argued that over the past four decades, airplane passenger seats and legroom shrank, while the average passenger got bigger. They say that causes overcrowding, hinders safety evacuations and even poses a risk of life-threatening blood clots.

Both the Centers for Disease Control and Prevention and the World Health Organization have warned long-distance travelers of blood clots in the legs, but the FAA says the condition is rare.

These Are The Airlines That Customers Hate The Least

Do your research before booking a flight for your summer vacation.

These arguments were echoed in Congress when Rep. Steve Cohen introduced a bill calling to standardize the size and space surrounding aircraft passenger seats. The House transportation and infrastructure committee voted down the bill as Flyers' Rights petition met the same fate.

The FAA denied the advocacy group's petition in 2016. It argued the concerns raised by Flyers Rights were "related to passenger health and comfort and do not raise an immediate safety or security concern."

The advocacy group was not satisfied with the response and took the issue to court.

The appeals court sided partly with Flyers Rights, arguing the FAA did not respond with enough evidence to support its safety claims.

However, the court also ruled it can't order the FAA to create new regulations. Instead, it ordered the administration to review the issue and provide a more "reasoned" response to Flyers Rights about passenger seat and space issues.