Trump Calls For 'Termination' Of Rules In U.S. Constitution 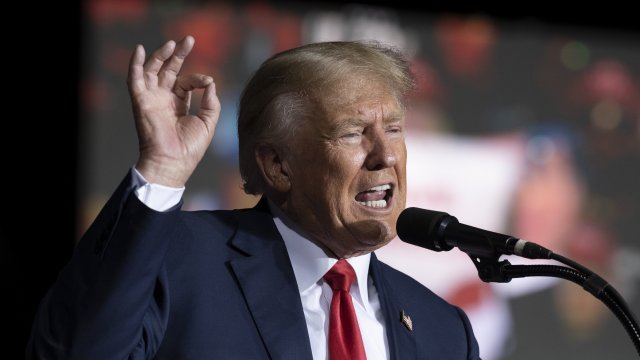 Donald Trump's comment is now putting some self-proclaimed constitutional conservatives in the hot seat over their support for him.

Some Republican lawmakers on Sunday sharply criticized former President Donald Trump over his social media post calling for the "termination" of the U.S. Constitution.

"I vehemently disagree with the statement Trump has made," said U.S. Rep Mike Turner.

On Saturday, the former president falsely claimed in a post on Truth Social that big tech companies and the Democratic National Committee committed "massive fraud" in the 2020 election and that it "allows for the termination of all rules, regulations, and articles, even those found in the Constitution" in order to overturn the election results.

Rep. Turner warned that Trump's claims could hurt him in the 2024 election.

CBS NEWS' MARGARET BRENNAN: Do you condemn him saying something like this?

U.S. REP. MIKE TURNER: Absolutely. And I believe, answering your question, that people certainly are going to take into consideration a statement like this as they evaluate a candidate.

The former president's comment is now putting some self-proclaimed constitutional conservatives in the hot seat over their support for Trump — like House Republican Dave Joyce, who on Sunday refused to disavow the former president over his comment.

ABC NEWS' GEORGE STEPHANOPOULOS: I’m asking if he’s the nominee, will you support him?

U.S. REP. DAVE JOYCE: I will support whoever the Republican nominee is. I just don’t think that at this point he’ll be able to get there, because I think there’s a lot of other good quality candidates out there.

A White House spokesman responded to Trump on Saturday, saying in a statement "You cannot only love America when YOU WIN."

White House Deputy Press Secretary Andrew Bates added the Constitution is "the ultimate monument to all of the Americans who have given their lives to defeat self-serving despots that abused their power and trampled on fundamental rights. Attacking the Constitution and all it stands for is anathema to the soul of our nation and should be universally condemned."

This is one of several controversies surrounding Trump since he announced his candidacy for president last month. On Friday, prosecutors gave closing arguments in a New York trial over potential tax fraud within the Trump organization and said Trump was fully aware of Trump Organization executives' efforts to avoid paying personal income taxes. The jury has not yet reached a verdict in that case.