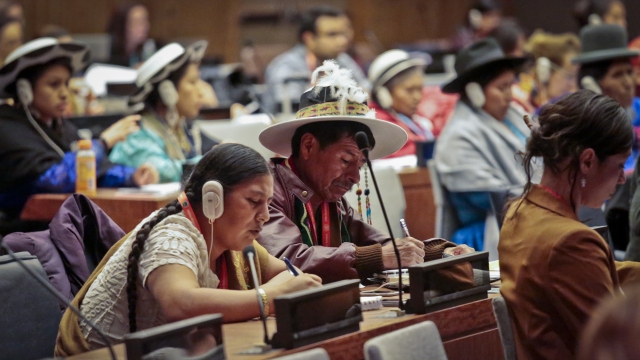 In its 21st year, the forum will focus on Indigenous rights and strengthening communities and cultures.

This week, Indigenous communities from across the globe will continue to gather at the U.N. to discuss the effects of climate change, culture and language preservation and human rights.

In its 21st year, the forum provides a unique opportunity for Indigenous leaders to advocate for respecting Indigenous land, rights and culture and create recommendations for the U.N. and member states.

Chief Ben Barnes of the Shawnee Tribe in Oklahoma attended one of the first sessions at the forum this year and spoke about the harm of boarding schools on Indigenous people.

U.N. TESTIMONY: We are asking members of the forum to consider acting on the issue of residential schools.

He asked for an independent expert to examine how boarding schools have been used against Native people across the world.

Preserving and protecting Indigenous languages is another focal point at the forum. 2022 kicked off the UNESCO’s International Decade of Indigenous Languages.

"We heard from Indigenous people all over the world," Hoskin said. "In some cases Indigenous languages are still under threat. The free exercise of being able to speak your own language is not guaranteed."

The U.N. Permanent Forum was established in 2000 and includes representation from seven regions including Africa, Asia, South America and Central and Eastern Europe, among many others. It advocates for the 2007 U.N. Declaration on the Rights of Indigenous People.

"We need to restrengthen indigenous communities," Barnes said. "We need to help languages, whatever that looks like. I don't have the answers, and we need to strengthen our cultures."

The U.N. Permanent Forum will also provide advice and recommendation to the U.N. to ensure that Indigenous People rights are protected.