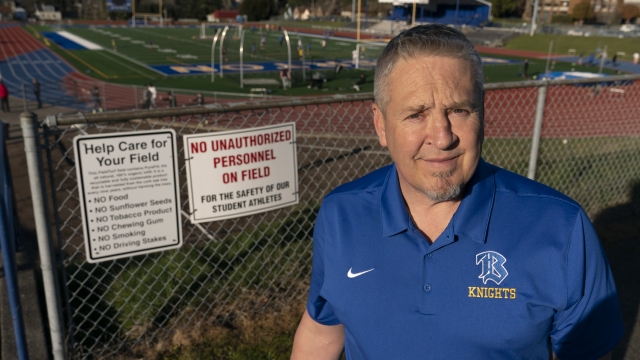 Court watchers say the Kennedy case reversed the lemon test, a Supreme Court standard for whether an action is violating the establishment clause.

The reoccurring battle between freedom of religion, and the separation of church and state played out again at the nation’s highest court. It was the second major case in a matter of weeks.

In a 6-3 ruling, the justices said former Bremerton School District football coach Joseph Kennedy had a constitutional right to pray on the field after games.

In 2016, Kennedy’s contract wasn’t renewed, after back and forth with the school district over his post game prayers.

One part of the First Amendment prohibits the government from establishing a religion, the other protects freedom of religion and speech.

The question: was Kennedy acting on behalf of himself or the public school, aka the government?

Eric Rassbach is the Executive Director of the Religious Liberty Clinic at Pepperdine University.

"Was he really on the clock or not, so to speak? Was he working for the school district at that time?" Rassbach said.

"That was actually the main thrust of Justice Gorsuch’s opinion: There is no such thing as a wall of separation between church and state in the Constitution, at least when it comes to preventing employees from exercising their religious rights," Bursch said.

Legal experts say there was a disagreement between the justices on whether Kennedy’s prayers were in fact “quiet” and “personal” as Justice Gorsuch asserted, with Justice Sonya Sotomayor saying that description “misconstrues the facts “ since the prayers happened in such a prominent place.

John Vile is the Dean and a political science professor at Middle Tennessee State University.

"There are almost two sets of facts here. One saying what Kennedy did was completely voluntary. If people want to join him, he can't stop or shouldn't stop them. Others say this was just a pattern of behavior," Vile said.

Even if the prayer was private, was it coercive for students?

"The court was very clear that coercion is very much something that we should be concerned about. But it said that the record in this case of the facts in this case meant that there wasn't actually any coercion," Rassbach said.

Rachel Laser is the President and CEO of Americans United for Separation of Church and State.

“They are opening the door to coaches and teachers pretending that what they are engaging in is private and to themselves when what we know is that it’s pressure for students to join," Laser said.

Alliance Defending Freedom wrote an Amicus brief on behalf of Coach Kennedy and NFL players like Kirk Cousins and Nick Foles, who say personal rights don’t end at the 50 yard line. “These football players are all men of faith, and that faith was developed and nurtured even at public schools as they came through high school and college,” said Bursch.

Recently, the high court has agreed and ruled in favor of religious rights in other high-profile cases.

Court watchers say the Kennedy case also reversed the so-called lemon test, a Supreme Court standard for whether an action is violating the establishment clause.

This leads some to believe the majority republican appointed court is laying the groundwork for a more originalist view of the constitution, or a method of viewing the text based on how it was understood at the time.

Earlier this year, the justices rejected a case involving a religious institutes's right to exclude job candidates who didn’t share their religious beliefs.  However, Justice Samuel Alito said it’s something the court may need to examine in the future.