For Many, Philippines' Disaster Is Only Getting Worse 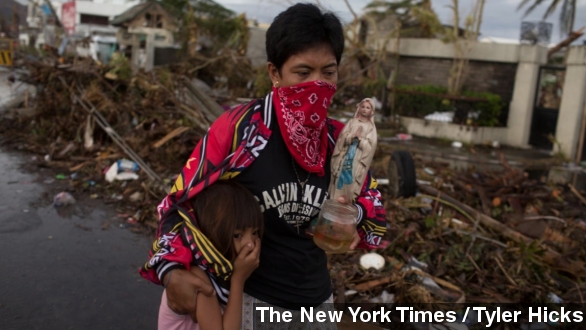 The United Nations estimates 1.9 million people are without homes in the Philippines. Many of them live in fear of disease.

​This month's typhoon in the Philippines killed thousands, but even the survivors now face an uncertain future, plagued by disease, hunger and homelessness.

The United Nations now estimates 1.9 million people are without homes in the Philippines. Two weeks after the storm hit, many of those are living in shacks with standing water that could carry disease. (Via CBS)

"So how many families are in this space?"

"In just this space here?"

"Many have caught coughs or colds, and some are suffering from stomachaches because of the water." (Via BBC)

International relief efforts from armies and aid groups have focused on treating the almost 20,000 people injured and delivering much-needed food and supplies. Wednesday, the U.N. relief agency said it had received roughly half of the $320 million in donations it had requested — although some observers have blamed corrupt local governments for complicating relief efforts. (Via CBC, Al Jazeera)

Remember, there are several options for online donation to Philippines recovery efforts. Among them: unicef.org/support, redcross.org.ph, and americares.org.