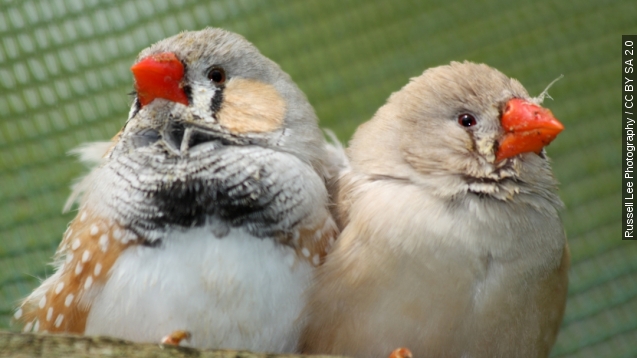 Researchers found zebra finches choose their mate based on personality. Not only that, but the pairing can help the survival rate of their offspring.

Birds in love may mean more babies, according to a new study in PLOS Biology. (Video via YouTube / Raslan Abuzant)

Researchers at the Max Planck Institute for Ornithology set out to study why some species mate for looks and others mate for personality.

To do so, they looked at zebra finches, which mate for life and raise their children together. (Video via YouTube / Alice Chodura)

In a lot of bird species, females choose who to mate with based on fairly straightforward genetic traits like plumage or beak size, but female zebra finches seem to just pick the guy they like. (Video via YouTube / der Naut)

In an experiment designed to see whether that's a good strategy or not, PLOS says the researchers let groups of finches pair off however they wanted, then let half "go off into a life of wedded bliss" while the other half got paired off with some other finch.

That's not quite an experiment in "why birds fall in love" like many outlets reported, but it did reveal that, at least for zebra finches, personality really does make a difference.

For whatever reason, finches who got to mate with their chosen one were way better at bringing new chicks into the world: 37 percent more chicks hatched and lived past infancy than in the couples that were randomly stuck together. (Video via YouTube / passinglunatic.

That's an increase of more than a third, which is pretty drastic. The study's lead author says the next step is to look at exactly what the happily paired off birds do differently: Do they feed their chicks better? Are they more attentive? That sort of thing.