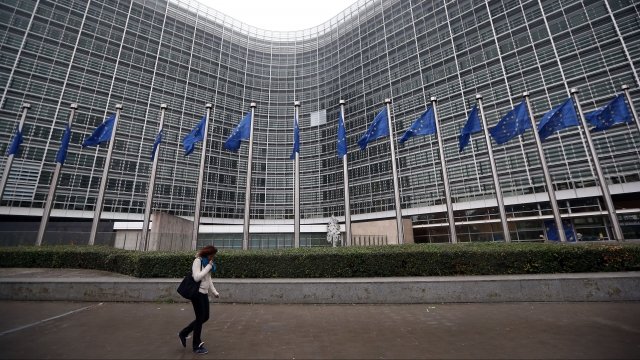 They asked the U.S. not to impose secondary sanctions on EU companies for doing business with Iran.

A handful of ministers from Germany, France, Britain and the EU are asking the U.S. not to impose secondary sanctions against EU companies for doing business with Iran.

The countries' foreign and finance ministers sent a letter dated Monday to U.S. Secretary of State Mike Pompeo and Treasury Secretary Steven Mnuchin. It was made public Wednesday.

The letter said: "We expect that the extraterritorial effects of US secondary sanctions will not be enforced on EU entities and individuals, and the United States will thus respect our political decision and the good faith of economic operators within EU legal territory."

The letter asked the U.S. to specifically exempt some areas of business, like pharmaceuticals and health care, as well as the energy, automotive, civil aviation and infrastructure fields.

This comes as the U.K., China, France, Germany and Russia scramble to keep the Iran nuclear deal alive without the United States' participation.

The letter said that in their current state, U.S. secondary sanctions could prevent the EU from "continuing meaningful sanctions relief to Iran."

It also said that the ministers share U.S. concerns regarding the status of Iran's nuclear program after 2025, but that the nuclear deal is the best way to address those concerns.