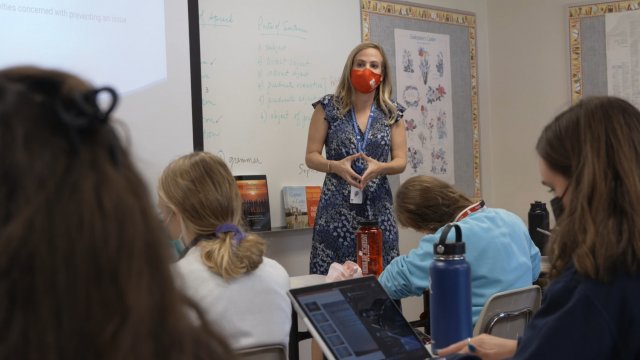 Two decades after 9/11, Tracy Walder reflects on how far we've come and why teaching gives her optimism.

Tracy Walder has been underestimated a lot.

“I actually had a parent that complained to the principal that I was lying," Walder said.

That parent couldn’t believe that Walder was a former CIA spy who fought terrorists in the wake of 9/11 and later became an FBI agent. To anyone else, that encounter may have discouraged them from teaching. But not Walder, who by this time was used to dealing with opposition.

“The day before Sept. 11, they were wanting to use my expertise; I had gotten good at gathering human intelligence from the terrorist training camps that were in Afghanistan," Walder said.

On Sept. 11, 2001, Walder was working in the CIA’s counterterrorism unit. After the terror attacks, her work drastically changed – putting her on course to track down the world’s most wanted terrorists, including Osama bin Laden.

Now, she teaches at the Ursuline Academy, an all-girls high school in Texas with a fully supportive community of parents. Her students learn about global terrorism; just recently, they were challenged to dissect the pros and cons of the Afghanistan exit. And they learn about jobs in the spy business.

“In order to change the gender dynamic and make it more equitable, I have to expose girls to these careers and the different things that they can do in these careers," Walder said.

She feels passionately about changing that gender dynamic in the intelligence community, in part due to the difficult sexism she faced in her career, particularly at the FBI – an experience she almost kept out of her best-selling memoir, "The Unexpected Spy".

“Even though it’s remarkable that I served at the CIA and the FBI, I feel ashamed sometimes of the fact that I experienced what I did," Walder said.

It wasn’t until a sexual harassment lawsuit was filed by 17 women against the FBI that she realized she wasn’t alone, and decided to talk about it, both in her book and with her students.

To Walder, teaching is a natural extension of her career in intelligence and law enforcement. She considers it as equally important and impactful – something she says is proven by the success of her former students, who now work at the CIA, State Department, Justice Department and so on.

“All of them found different outlets and different ways to be involved in national security and this whole foreign policy apparatus, in whatever way suits them best. And I love that," Walder said.

And despite the many geopolitical challenges she sees in the world, it’s teaching that gives her optimism.

“I think if I wasn’t a teacher, I would probably be in a really dark place of not knowing how to enact change. A lot of people look at a way to enact change as, ‘run for an office and make this bill.’ We actually need to start at this micro level, and I feel like I’m actually enacting change, whether they go into national security or not. But at least they’re armed with this information, and at least they’ll keep themselves informed," Walder said.