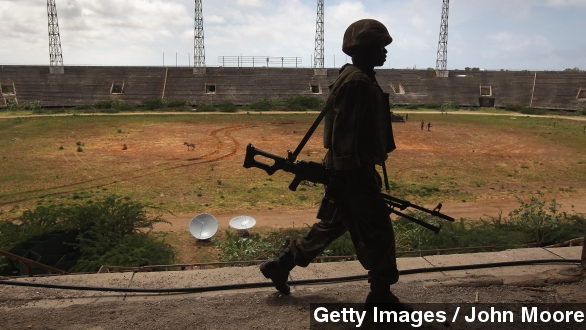 Zakariya Ismail Hersi, a former member of Al-Shabab with a $3 million bounty on his head, surrendered to government forces in Somalia Saturday.

A former senior official in Al-Shabab, Somalia's Al-Qaeda-affiliated terrorist group, with a $3 million bounty on his head surrendered to Somali government forces Saturday.

Zakariya Ismail Hersi was one of eight Al-Shabab officials targeted by the U.S. Department of State two years ago; the administration offered a total of $33 million for information leading to their capture. Hersi apparently handed himself in to government troops in the Gedo region without incident.

According to the government, Hersi surrendered after falling out with the militant group's current leadership. Al Jazeera reports the group claims Hersi hasn't been a member for two years, and was only ever a mid-level official.

Since he's been disowned, it's unlikely Hersi's capture will have much of an impact on Al-Shabab's day-to-day operations. But the news does illustrate how much progress has been made against the terrorist group.

Hersi was originally targeted by the U.S. for his supposed close ties to former Al-Shabab commander Ahmed Abdi Godane, who was killed in a U.S. drone strike back in September. Hersi left after apparently clashing with Godane loyalists.

A protracted government offensive against the group, supported by African Union soldiers and backed by the U.S., has driven Al-Shabab from many major cities in Somalia, including the capital Mogadishu.

But the group is still a major threat in the region — on Thursday, militants attacked a Christmas party at an A.U. base in Mogadishu, killing five peacekeepers and one foreign contractor.

It's not clear if anyone will be able to collect the reward on Hersi's head, since he surrendered.