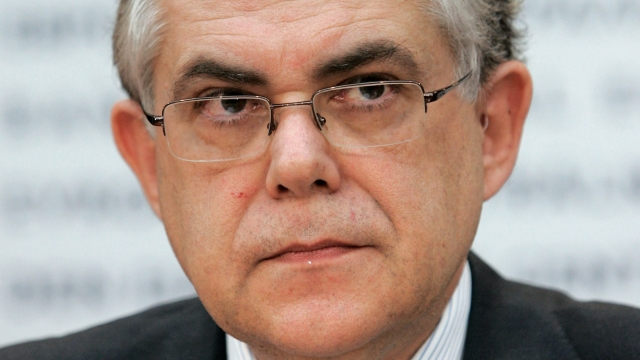 Lucas Papademos was hospitalized with non-life-threatening injuries after an explosive device hidden in an envelope went off inside his car.

A former Greek prime minister was injured Thursday when an explosive device hidden inside an envelope went off inside his car.

Lucas Papademos, his driver and another passenger were driving through central Athens Thursday evening when the bomb went off.

Authorities say Papademos was sorting through his mail and opened the booby-trapped envelope.

All three were taken to a local hospital and treated for non-life-threatening injuries.

Papademos suffered wounds to his chest, stomach and leg. But officials say he is expected to be OK.

Refugees and migrants at a camp on the Greek island of Lesbos are suffering from wintry conditions and poor shelter.

The former PM was appointed in 2011 as part of a political shakeup due to Greece's ongoing financial crisis. He only had the position for six months.

But during that short time, he became the face of the tough austerity measures that were imposed as part of Greece's bailout from the European Union and the International Monetary Fund.

Greece still owes billions of dollars to its creditors, a fact that sparked violent protests across the country.

And anti-austerity groups have threatened to get back at the government by targeting people who helped handle the financial crisis.

As of early Friday, no one had claimed responsibility for the attack against Papademos.