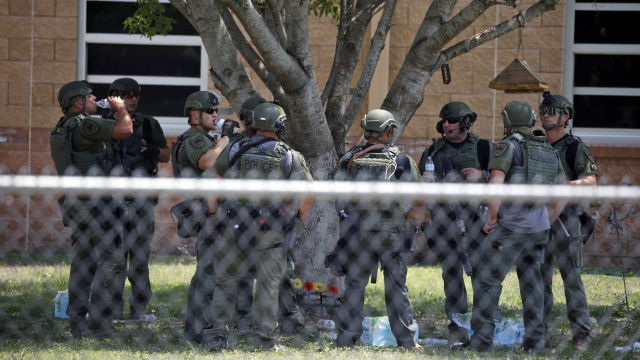 Higgins is a former SWAT team member, as well as the former Chief of Bergen County Police and Director of Public Safety for Bergen County, New Jersey.

Analyzing the video footage, he shares his assessment of the officers' actions.

NEWSY'S ROB NELSON: I believe what I heard yesterday was that the first officers arrived there within three minutes of the shooter being there. Just to be clear — an assault weapon can do a lot of damage in three minutes.

HIGGINS: It sure can. Every round that is fired can take a life.

NELSON: Now, about 45 minutes into the surveillance video, more officers by that point have arrived on the scene — a lot more — still though, they have not gotten into the classroom. ... At this point, officers have shields and guns pointed toward the direction of the classroom but as we can see in the video, they're still at the opposite end of the hallway from where those kids were under attack. Is this, overall, the right progression in terms of the response?

HIGGINS: So, the weapon that's being used by the shooter is a high-powered rifle and it will go through the average officer's bullet-resistant material. So the officers are considering that round. But, typically in situations like this — whether it's an active shooter or a barricade — the officers who would enter if shooting began are typically closer to the room, what we refer to as "containing the subject" in the room.

NEWSY'S ALEX LIVINGSTON: So at that point, do you believe that those officers should have been closer so they could have a better vantage point? A better idea of what was going on? Because like Rob said and we saw in the video, they were pretty far back.

HIGGINS: As we said earlier, they go in almost immediately and engage the individual immediately and they draw fire. So they know this individual is in there and as it turns out, it's where they ultimately enter and then engage [with] the individual. But it took so long, that our discussion is based on that. They should have been closer to the door so they can try to get peeks in and if shooting began, which during one of these time periods on this video, shooting begins in the room so officers know that there are victims in the room. They hear shooting. They must assume that people are being shot.

NELSON: When officers are shot at, in this case, they retreated as opposed to the common wisdom of when there's an active shooter, you go in and neutralize as quickly as you can. You don't run the other direction. So, I just want to make sure that in that moment, if those officers had taken fire and are rightfully scared and they know the gravity of what's happening, how, in that reaction, once the gunman fired at them, should they have reacted? And considering what you said about the nature of the weapon, do you advocate that more police in America need better equipment to shield against the kind of bullets coming out of an automatic rifle?

HIGGINS: Yes. To address that directly, they need better equipment. Officers in our country are equipped with — the typical officers — [are] equipped with uniforms that have ballistic material that can usually withstand only a handgun. So in this particular situation, those officers — at least the initial ones who didn't have a shield — had no protection against that weapon.

LIVINGSTON: Does that pose more of a threat? If someone who does not have any protection, in a situation like this, does that do more harm than good if they do run directly into it?

HIGGINS: Sure. Officers who are going run into gunfire with a weapon like this are exposing themselves. They basically are going in with no protection.

NELSON: Now nearly 53 minutes into the video, gunshots rang out again as law enforcement waited, still at the end of that hallway. ... There is some movement toward the classroom but again, no one actually goes in. Is that the right response at this point in an active shooter situation?

HIGGINS: No. Standing down and waiting like this while someone is shooting a firearm in a classroom — it's the officer's responsibility to go in and save those lives.

LIVINGSTON: And a reminder: That's 53 minutes into this entire thing. So, close to an hour into the video, you can see officers walking up and down the hallway, with one even looking at his watch. What is protocol for officers standing by in an active shooter situation? We also saw a video of an officer getting hand sanitizer ... which I assume is not easy to watch as we're hearing bullets ring out.

HIGGINS: There does seem to be a large amount of officers standing around. What we don't know is what's going on in the rest of the building. Typically after a situation like an active shooter or even a barricade, one of the goals of officers is to go find individuals who may be victims or may have locked down during the incident and that are still locked down. So there seems to be too many officers in the hallway. If shooting began in that classroom, and then the shooter emerged out of the hallway, there are just too many officers to get out of the way.

NELSON: Eventually EMTs arrive there at the scene, at one point appear to be giving hand signals to other responders. What authority does an EMT have in an active shooter situation?

HIGGINS: In the United States, all of these events, whether it be a disaster like an active shooter, a natural disaster or fire or planned event, we use the incident command system — and it's standard throughout the United States. In that system there is an individual who is the incident commander, or the on-scene commander. So the focus here should be on the management of your personnel. There does not appear, throughout any of these videos, to be any one individual in charge. There are different people at different times giving some direction, presumably. We see them pointing. We hear some muffled voices. So it appears as if this EMT just jumps in and takes some control so that he can direct people around.

LIVINGSTON: As you're watching this video, given your background, your career, what is going through your mind? At what point was there just absolute failure in this video?

HIGGINS: When officers first come in, you see this very quick engagement, they back out, then one officer takes it upon himself to go down the hallway again and then moves back. There should be a much more coordinated effort into advancing into the room. So, obviously, their tactics were very poor here. They didn't coordinate. There was no command and control. And then once they knew there was a shooter in that room and there were victims, they really had no choice. They should be formulating a plan to get in that room as quickly as possible.

NELSON: Other than getting inside that school within three minutes of the gunman entering, did police do anything else right here?

HIGGINS: So there are different points during this when it appears that as they assemble, as they get together, once they move into the classroom — at the end of the day, they did bring this to an end by taking out the shooter. But, there are more areas of concern that we need to focus on.

NELSON: And that shooter was in that school for more than an hour before being fatally shot. Thank you for walking us through the tactical part of all this. Let's just end on a more human note. I don't know if you have kids, but if you do and they were in that classroom and you're a parent watching that video, how would you react? How would you feel?

HIGGINS: It would be horrific. We don't even need to be connected to the situation and we all look at this and cringe. I have a seventh grader, so yes, I'm in that time frame when it just bugs the hell out of me to see it.

NELSON: Should these folks remain on the force?

HIGGINS: This needs to be an in-depth inquiry. I would begin with the top down, like I said, a big part of this is the command and control, which was completely vacant.

LIVINGSTON: And we saw in the days and weeks after that just absolute chaos, as far as pointing fingers, not knowing who should have been doing what and who should have been where. Brian Higgins, the former Chief of Bergen County, New Jersey Police. Thank you so much for joining us. We really appreciate it.