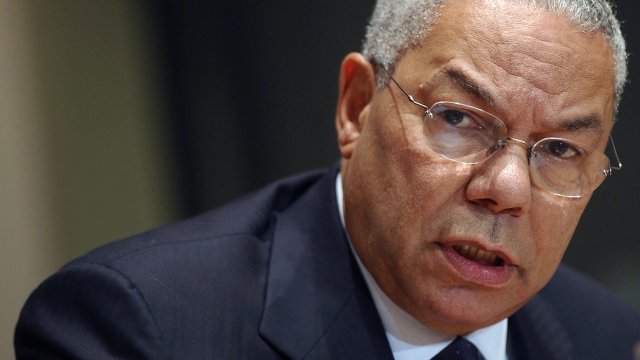 Colin Powell guided American presidents through war and peace as Chairman of the Joint Chiefs of Staff and Secretary of State.

Colin Powell's parents emigrated from Jamaica and he grew up in the Bronx.

Powell was a geology major at City College of New York, and pivoted to ROTC.

He excelled as a soldier, serving two tours in Vietnam before obtaining a prestigious fellowship in Office of Management and Budget in the Nixon years.

But back to the battlefield he went, working up to the rank of General before joining President Reagan’s White House as National Security Adviser.

In 1989, George H.W. Bush named him Chairman of the Joint Chiefs of Staff. He rose to prominence in the first Gulf War.

In 2003, a moment at the UN Security Council that would mar his legacy:  Despite personal reservations, Powell laid out the case for a new war in Iraq.  Eight years later, and countless injured or killed: no weapons of mass destruction.

Powell’s family says he died of COVID, despite being fully vaccinated. He was immunocompromised—in the midst of a battle with blood cancer, which affects the body’s immune response. General Colin Powell was 84.