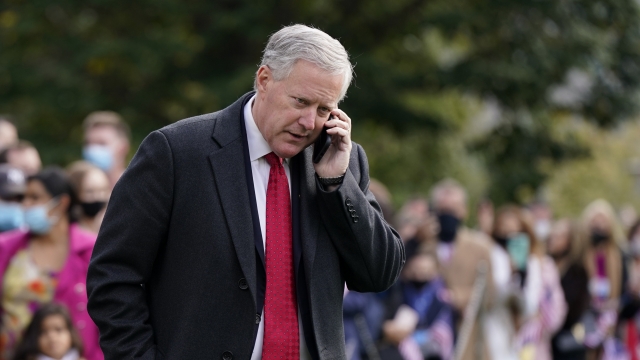 The House panel believes he may have more insight on former President Trump's actions during the Capitol insurrection.

Mark Meadows, Donald Trump's former chief of staff, is cooperating with a House panel investigating the Jan. 6 Capitol insurrection, putting off for now the panel's threat to hold him in contempt, the committee's chairman said Tuesday.

The panel "will continue to assess his degree of compliance," Mississippi Rep. Bennie Thompson said in a statement. He said Meadows has produced records and will soon appear for an initial deposition.

The agreement comes after two months of negotiations between Meadows and the committee and after the Justice Department indicted longtime Trump ally Steve Bannon for defying a subpoena. Meadows' lawyer had previously indicated that his client would not comply, a stance the committee said was unacceptable.

Under the tentative agreement, Meadows could potentially decline to answer the panel's questions about his most sensitive conversations with Trump and what Trump was doing on Jan. 6 as hundreds of rioters violently broke into the Capitol and interrupted the certification of Joe Biden's 2020 election victory.

Trump — who told his supporters to "fight like hell" that morning — has attempted to hinder much of the committee's work, including in an ongoing court case, by arguing that Congress cannot obtain information about his private White House conversations.

Meadows' lawyer, George Terwilliger, said in a statement that "we appreciate the Select Committee's openness to receiving voluntary responses on non-privileged topics."

Terwilliger said he was continuing to work with the committee and its staff on a potential accommodation that would not require Meadows to waive the executive privileges claimed by Trump or "forfeit the long-standing position that senior White House aides cannot be compelled to testify before Congress."

The deal with Meadows highlights how the committee is trying to balance its need for information about Trump's role in the Jan. 6 insurrection against the desire to complete the investigation quickly. While the committee has rejected Trump's legal arguments and President Biden has waived executive privilege to hand over documents and records, the panel wants to avoid lengthy legal entanglements that could delay their work.

Still, Meadows' intention to work with the panel is a victory for the seven Democrats and two Republicans on the committee, especially as they seek interviews with lower-profile witnesses who may have important information to share. The panel has so far subpoenaed more than 40 witnesses and interviewed more than 150 people behind closed doors.

Terwilliger had previously said that Meadows wouldn't comply with the panel's September subpoena because of Trump's privilege claims. But the House panel insists it has questions for Meadows that do not directly involve conversations with Trump.

In the committee's September subpoena, Thompson cited Meadows' efforts to overturn Trump's defeat in the weeks before the insurrection and his pressure on state officials to push false claims of widespread voter fraud.

"You were the president's chief of staff and have critical information regarding many elements of our inquiry," Thompson wrote. "It appears you were with or in the vicinity of President Trump on January 6, had communication with the president and others on January 6 regarding events at the Capitol and are a witness regarding the activities of the day."

Lawmakers on the committee had hinted for several weeks that they were prepared to hold Meadows in contempt, as they had Bannon. But Thompson said just before Thanksgiving that the committee "won't rush the effort" to make clear that they had given Meadows, a former Republican congressman from North Carolina, every chance to cooperate.

On Wednesday, the committee will vote on whether to pursue contempt charges against a separate witness, former Justice Department official Jeffrey Clark, after he appeared for a deposition earlier this month but declined to answer questions. The House could vote to hold him in contempt as soon as this week. It would be up to the Justice Department to decide whether to indict him.

A report from Democrats on the Senate Judiciary Committee detailed how Clark championed Trump's efforts to undo the election results and clashed as a result with Justice Department superiors who resisted the pressure, culminating in a dramatic White House meeting at which Trump ruminated about elevating Clark to attorney general. He did not do so after several aides threatened to resign.