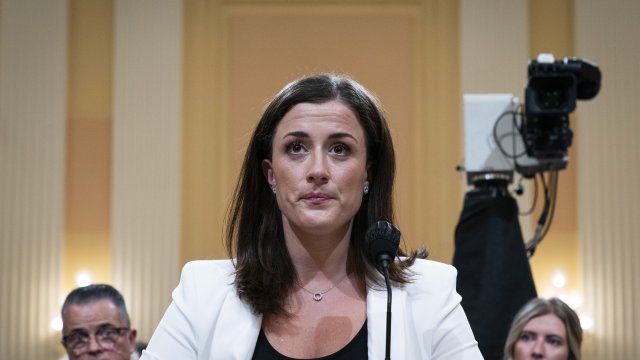 A former White House aide described publicly how former President Donald Trump was prevented from joining his supporters at the Capitol.

In explosive testimony during a last-minute hearing convened by the Jan. 6 committee, a former White House aide described publicly for the first time former President Donald Trump’s rage when he was prevented from joining his supporters in the march to the Capitol — rage that culminated in the commander in chief allegedly attempting to commandeer the presidential limo.

“The president reached up to the front of the vehicle to grab at the steering wheel," Cassidy Hutchinson said. "Mr. Engel grabbed his arm, said, 'Sir you need to take your hand off the steering wheel. We’re going back to the West Wing. We’re not going to the Capitol.' Mr. Trump then used his free hand to lunge toward Bobby Engel."

Hutchinson, an aide to Trump’s fourth and final White House chief of staff, Mark Meadows, said the president was already furious over his supporters being screened for weapons at his rally. Even though some were heavily armed, he wanted security procedures like metal detectors, also known as mags, removed.

“I was in the vicinity of a conversation where I overheard the president say something to the effect of I don't f-ing care they have weapons," Hutchinson said. "They’re not here to hurt me. Take the f-ing mags away."

When rioters breached the Capitol, Hutchinson said she alerted Meadows, but he was unfazed, only taking action when the White House counsel implored him to talk to Trump.

Hutchinson said she overheard key conversations in the White House that reveal Trump was not bothered by calls to hang Vice President Mike Pence.

“Mark responded something to the effect of, 'You heard him, Pat. He thinks he deserves it. He doesn’t think they’re doing anything wrong,'" Hutchinson said.

Hutchinson also testified that Trump considered pardoning his supporters that took part in the riot, along with key White House aides.

In an interview with Newsy after the hearing, Jan. 6 committee member Adam Schiff laid out what the committee will share in the next two hearings:

“Who was involved in pulling it together, who participated in that mob, the role of the white nationalist groups," Schiff said. "Then the final hearing that we have at least planned at this point documents what the President was doing during that violent attack and, most importantly, what he was not doing: graphic dereliction of duty by the president [of the] United States.”

Those hearings are currently slated for next month.