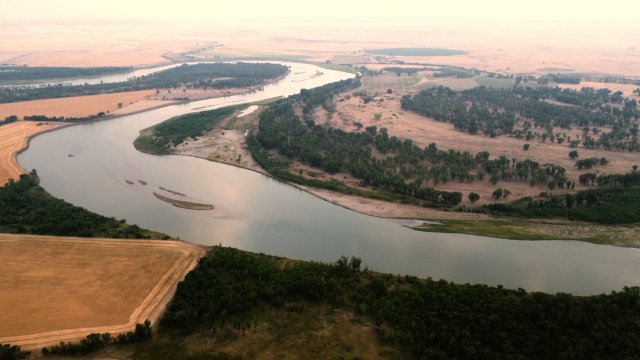 The Sioux and Assiniboine tribes are filling the gap they believe traditional treatment leaves.

Marty Reum struggled with addiction for years. It started with alcohol and ended with meth, leading to a dangerous encounter that almost ended his life.

He sought professional help, but ultimately his community on the Fort Peck Indian Reservation helped him sustain sobriety, through a method experts call “natural recovery.”

“I took some tools from that traditional treatment, but I took a lot more from being right here with our people," Reum said.

Conventional treatment ranges from inpatient and outpatient care to sober living homes and AA meetings. In natural recovery, people rely more on support through cultural traditions. Reum says his naming ceremony helped him form a sense of identity, self-esteem, and connection to his tribe.

“Our cultural belief is that when you have your native name, you're able to identify with your ancestors on the other side," said Ramey Growing Thunder, director of the Language and Culture Center.

Other Indian ceremonies, like sweat and Sun Dance, establish communal support networks for people recovering from addiction—often with others that are also in recovery or were touched by addiction in another way. All of these traditions helped Reum gain an understanding of his culture that he wasn’t taught growing up.

“I didn't know any of that because our family wasn't traditional because of boarding school, because of these horrific events that changed the landscape for our people still to this day," Reum said.

Up until the late 20th century, Indian children were forcibly sent to schools to quote "civilize" them into European-American culture. Physical and mental abuse was frequent. Reum’s father is a boarding school survivor, and like many other survivors, was left traumatized. That trauma has had a long, lasting impact—one that experts say needs to be addressed to combat the addiction crisis plaguing Indian Country today.

“Without really, really coming to terms and identifying what had happened and acknowledging it, then we'll never get that peace," said Adriann Ricker, research associate at the Little Holy Ones Project.

The latest statistics on drug use in and near Indian reservations are daunting, particularly among teenagers. But members of the Fort Peck Tribes maintain a positive outlook.

People on the reservation are hopeful that natural recovery can open paths to sobriety for those who didn’t find success in conventional treatment alone. But they also acknowledge that challenges remain—especially when it comes to resources.

While the benefits of natural recovery are being embraced as an alternative, it was partially borne out of the delay in funding for formal treatment.

“Usually when we get the funding, we're behind the curve on what the new issue is," said Judge Stacie Four Star, chief judge of the Fort Peck Tribal Court.

Judge Four Star has seen success after introducing elements of natural recovery to people in court for drug-related issues. Addiction experts say it demonstrates there’s still much more to learn about recovery, among Indian tribes and every other demographic.

“People believe that if you have a serious addiction problem, that you have to go to in-patient treatment, that rehab is the only way. And research doesn't really support that," said Monica Skewes, professor of psychology at Montana State University.

The learning curve has been steep. But the Fort Peck Tribes say the reservation’s cultural revitalization has left them better prepared to deal with addiction. And they look at the restoration of the buffalo – which once faced extinction – as a symbol of strength and resilience.