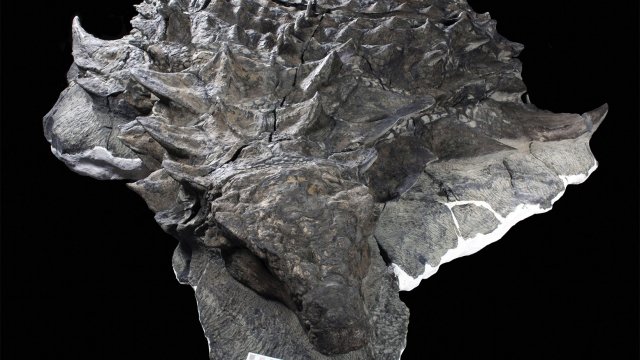 A fossil of an ancient armored dinosaur was so well-preserved that scientists think it could help explain something about modern animals.

If this dinosaur fossil tells us anything, it's that the spiky armor some nodosaurs had wasn't just for defense.

In 2011, Canadian miners accidentally dug up a 110 million-year-old fossil that had armor and spines — basically the "dinosaur equivalent of a tank."

It's taken researchers over 7,000 hours to completely uncover it. They think this dino had quite a bit in common with antelopes and rhinoceroses.

When an asteroid struck Earth 66 million years ago, it didn't just cause mass extinctions — it might've put our planet it darkness for years.

Palaeontologists say they believe although the dinosaur's shell was used for defense, it also might've helped attract mates — similar to the horns and antlers of today's animals.

But researchers can't for sure say what all the armor did until they find other specimens. And they say finding one that's this well-preserved is a long shot.