Not All MLB Stadiums Are Equally Safe; An Incident Wednesday Proved It 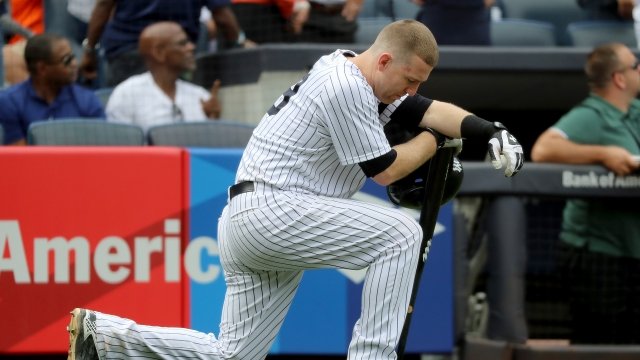 During a game between the New York Yankees and Minnesota Twins, a line drive from a Yankees player hit a child in the stands.

The issue of netting in Major League Baseball stadiums is back under the magnifying glass.

During a Wednesday game between the New York Yankees and Minnesota Twins, a line drive from Yankees third baseman Todd Frazier hit a child in the stands.

It's estimated the ball left Frazier's bat at over 100 mph.

This marked at least the third time this season a fan at Yankee Stadium was hit by an errant ball or piece of a bat. And many are asking: How safe is safe enough?

The MLB commissioner reiterated after the game that the league leaves the protective netting issue up to the teams themselves.

But teams' stances have differed across the country, and in New York's case — within the same city.

CTE Found In The Brains Of 110 Former NFL Players

Scientists found that nearly every NFL player who donated their brain to the study had CTE, a disease linked to head injuries in football.

On par with league guidelines, all MLB teams have nets that go up to both dugouts.

About a third of the teams have gone further and extended their nets to the far end of the dugouts.

The New York Mets took even greater steps this year, expanding their nets past the dugouts. Yankee Stadium doesn't even have nets covering the full span of its dugouts.

Following the incident, New York City Councilman Rafael Espinal praised the Mets and pressed the Yankees to review their stance.

Earlier this year, Espinal introduced a bill that would force both the Yankees' and Mets' stadiums to be even safer with netting up to the foul poles.

The New York Times notes if the Yankees had nets to the ends of the dugouts, Wednesday's incident likely wouldn't have been an issue.

One argument against extending protective nets is that it can worsen fans' views.

The Yankees' chief operating officer said earlier this year that some fans who have box seats were especially upset that the team was considering more netting.

But several players from both the Yankees and Twins said after the game Wednesday that safety is more important.