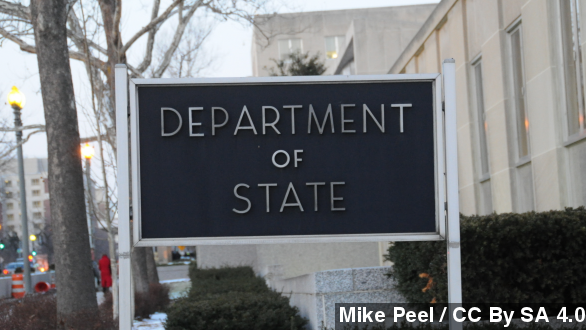 The State Department's unclassified email network was targeted by hackers recently, raising questions about the strength of U.S. cyber security.

The U.S. State Department has announced an attack on its computer systems — the fourth time in recent weeks a government system has been hacked. The breach was in the department's unclassified email network, which was temporarily shut down to update security.

It's not clear what the hackers may have gained from the hack, or the attacks on the other three government computer sytems for that matter.

The State Department hack coincided with the breach of one of the White House systems last month, which also resulted in a shutdown of communications systems.

The U.S. Postal Service revealed a similar attack earlier this month. It looks like limited information on post office employees and people who contacted its call center between January and mid-August was exposed but it's not clear why hackers would want that data. (Video via U.S. Postal Service)

The hacks on the Postal Service and NOAA appear to have come out of China. Some have alleged that the Chinese government could be behind the Post Office attack, but that has not be confirmed by any U.S. official.

The State Department hack occurred around the same time as the intrusion on The White House's systems. Reports circulated that U.S. officials believe Russia could have been responsible for that attack.

One expert explained to CNN that even though hackers only gained access to unclassified systems, the attacks raised serious questions about the strength of U.S. cyber security.

"I think the U.S. government security is pretty much failing and it has been for a long time.  But it does seem like these particular adversaries are going after government entities, probably to get information that could lead to classified networks."

None of the attacks have been confirmed to be connected but one security researcher for Tripwire writes that they all share a common theme.

"It seems like hacking groups ... are in reconnaissance phase, probing government agency networks to identify vulnerabilities and what data they can access. ... [These hacks] could be a precursor to a more organized attack."

Russian and Chinese officials have denied any involvement in the hacks.