Fracking Could Be Causing A Spike In Texas Earthquakes 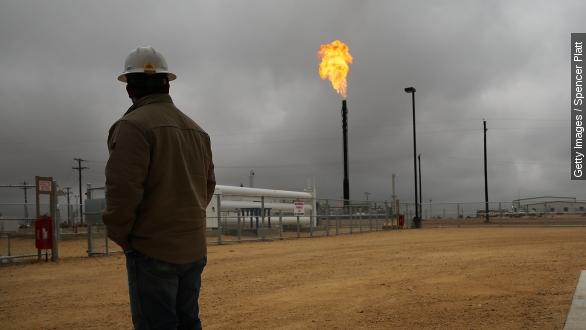 A study published in April says drilling for oil and gas in Texas has likely contributed to increasing seismic activity there in recent years.

A recent report says hydraulic fracturing, or fracking, is likely responsible for a dramatic uptick in Texas earthquakes.

A CNN report Sunday focuses on Irving, Texas, situated between Dallas and Ft. Worth. According to the U.S. Geological Survey, there have been close to 40 quakes in the area since the beginning of the year.

A study published in April from researchers at Southern Methodist University points to oil and gas industry activity — specifically hydraulic fracturing and the disposal of wastewater  — as a likely cause of recent quakes. (Video via City of Irving)

There's been a sharp upswing in seismic activity in recent years. According to The Dallas Morning News, before 2008, there had been two noted earthquakes in north Texas:

"Since (2008), North Texas has logged more than 150 quakes of significant magnitude."

A magnitude 4 quake shook the region on Friday, followed by a magnitude 2.7 quake the next day. (Video via KXAS)

One USGS geophysicist who talked to CNN said while it's possible fracturing activity is responsible, there isn't enough data to place definitive blame: (Video via CBS)

"There just isn't enough evidence to support the claim yet in this case. The connection has not been established, but we cannot rule them out. ... We cannot make a correlation with any wells without knowing their history."

In the meantime, the drilling isn't expected to slow down. Last week the Texas legislature approved a bill that would prohibit municipal bans on drilling. Texas Gov. Greg Abbott has indicated he plans to sign it into law.