Macron Speaks Frankly About Russia — As Putin Stands Beside Him 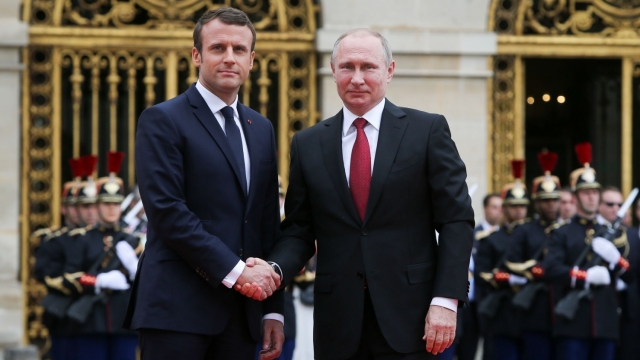 Office of the French President

Russian President Vladimir Putin visited France to set up a warmer relationship with the country.

But French President Emmanuel Macron didn't hold back his criticisms while he played host Monday.

As Putin stood right next to him, Macron called out Russian propaganda, election meddling, LGBTQ repression and the use of chemical weapons in Syria.

Macron called the Russian state-backed outlets RT and Sputnik "agents of influence" that published lies about him during his campaign.

He told French media and Putin that chemical weapons in Syria were a red line for France –– that if any country used them in the conflict, France would take action.

And Macron noted Putin agreed to a "regular monitoring" of Chechnya, where a pro-Kremlin leader's security forces are suspected of imprisoning and killing gay people.

At least 26 are said to have died.

Putin didn't respond directly to all of Macron's accusations, but he claimed Russia did not interfere in the French presidential election.