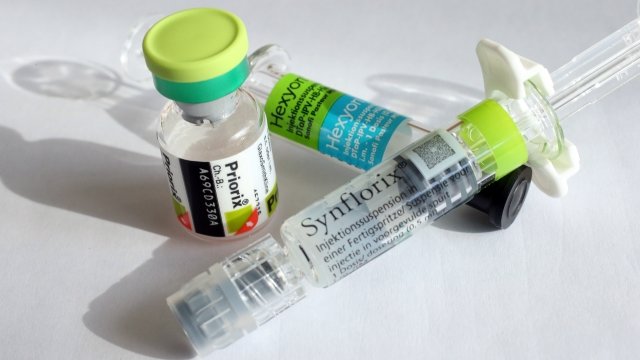 France will mandate eight more vaccinations for diseases, such as measles and mumps.

Amid measles outbreaks and drops in vaccinations, the French government is making more vaccines mandatory.

Vaccines for diphtheria, tetanus and polio are already a must in France. Eight more — which state health authorities already recommend — will be added to that list in 2018.

Many French doctors support these mandatory vaccinations. Back in June, 200 doctors and hospital administrators publicly petitioned for the new policy.

The Future Of Flu Vaccines Doesn't Involve Getting A Shot

In his announcement, the prime minister said, "Diseases that we believed to be eradicated are developing once again." He referenced the European measles outbreak, which has killed 10 children in France since 2008. The World Health Organization says the disease is rapidly spreading throughout Europe because of drops in immunization coverage.

France's new policy follows in the footsteps of Italy's.

In May, Italy's government said children must be vaccinated for 12 diseases before they can enroll in public school. The country's health minister hopes the mandate will send a "strong message to the public" about the importance of vaccines.