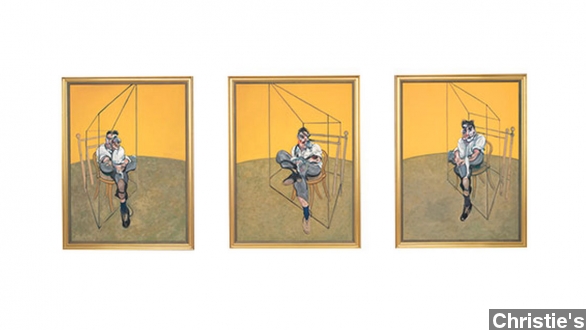 The triptych "Three Studies of Lucian Freud" sold for $142.4 million, beating out the previous all-time high auction price of $120 million.

A picture is worth a thousand words, and one particular picture is also worth $142.4 million.

At least that’s what was paid Tuesday for Francis Bacon’s 1969 triptych — “Three Studies of Lucian Freud.” That’s the highest price ever paid for artwork at auction. (Via The New York Times)

In this painting, Bacon, who died in 1992, depicted rival painter Lucian Freud — a man who also happened to be the grandson of Sigmund Freud. (Via Francis-Bacon.com, The Guardian)

Bacon reportedly intended the “Three Studies” be kept together, though they were separated for decades. The seller, who remains anonymous, bought one in Rome in the 1980s, one in Germany and one in Japan. (Via Christie's)

The trio was sold at Christie’s in London, an auction house where serious people are very serious about buying expensive art.

Seven bidders got into the fray, with the winner phoning in. To start, “Three Studies of Lucian Freud” had also boasted the highest-ever asking price, so this outcome was somewhat predictable. (Via The Independent)

The more than $142 million haul beats out Edvard Munch’s “The Scream” for highest price at an auction. It sold last year for nearly $120 million. (Via Museum of Modern Art)

By the way, this is just one of two triptychs Francis painted of Freud. The other is missing.