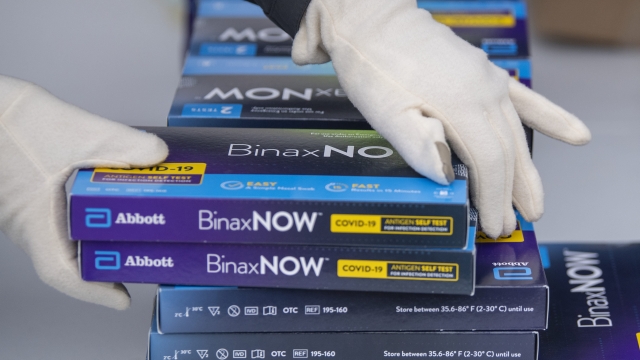 The Biden Administration is calling on Congress to approve more COVID relief funding, nearly two weeks after it was cut from a federal spending bill.

Millions of uninsured Americans may find it more difficult to get free COVID-19 tests after the federally funded program ended Tuesday at midnight. Other government-backed programs will also soon run out of money unless Congress passes additional COVID relief funding.

Senior Biden Administration officials said Monday that Congress should provide $22.5 billion for continuing the battle against the virus without cutting other programs to pay for it.

The huge overall bill was stocked with victories for both parties.

The remarks came nearly two weeks after a new round of COVID-19 funding was pulled out of a $1.5 trillion government-wide measure after rank-and-file Democrats rejected cuts that party leaders had negotiated with Republicans to pay for it.

Though President Biden signed the bill into law, the deletion of the COVID-19 funds was a major setback for Democrats.

"Our concern right now is that we are going to run out of money to provide the types of vaccines, boosters, treatments to the immunocompromised, and others free of charge that will help to continue to battle" the pandemic, White House press secretary Jen Psaki said Monday.

Top House Democrats have said they believe they will have to find savings to pay for the additional spending to move legislation through Congress. The biggest hurdle would be in the Senate, where Democrats will need at least 10 GOP votes to reach the 60 votes needed to move most significant bills to passage.

As COVID Cases Rise In Europe, How Worried Should Americans Be?

The W.H.O. is urging people to remain cautious, and Dr. Anthony Fauci predicts the U.S. will see an increase in cases due to the BA.2 variant.

Republicans say savings to pay for the new expenditures should be found from the trillions that Congress has already provided since the pandemic began two years ago. That includes a $1.9 trillion measure Democrats pushed through Congress over unanimous GOP opposition a year ago.

Around $300 billion of last year's $1.9 trillion COVID-19 relief measure remains unspent and not legally committed to a specific program or recipient, the administration officials said.

But around $240 billion of that has been promised to specific recipients like states and cities, who have built the amounts into their budgets, the administration officials said. The administration has held back some of the rest for emergencies, they said.