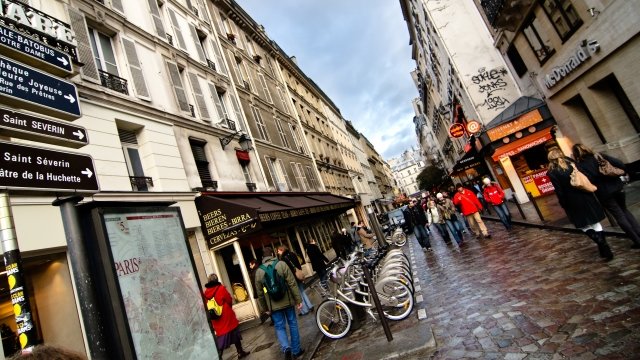 In a 2015 French government survey, 100 percent of the 600 women surveyed said they had experienced sexual harassment on public transit.

It's an idea Marlène Schiappa — France's junior minister for gender equality — has talked about for months. In August, she told NPR street harassers should be fined "the equivalent of thousands of dollars on the spot."

Schiappa was appointed by French President Emmanuel Macron earlier this year. She's in charge of "equality between women and men" and is tasked with addressing issues like street harassment, pay inequality and women's workplace rights.

Street harassment is a big problem in France, specifically the Paris region. In 2015, the French government's High Council for Equality Between Women and Men reportedly surveyed 600 women from the area around Paris about sexual violence on public transit. One hundred percent said they had experienced sexual harassment on public transit.

Street harassment is widespread outside of France. One activist says it happens in every country in the world. In the U.S., laws regarding the issue vary by state.

In 2014, advocacy group Stop Street Harassment surveyed approximately 1,000 women in the U.S. over the age of 18. Sixty-five percent reported experiencing at least one type of street harassment in their lifetime.

We don't know yet how much the French government would fine street harassers if the measure goes through. But back in June, Schiappa told The Guardian, "Twenty euros would be a bit humiliating, €5,000 would be more of a deterrent."