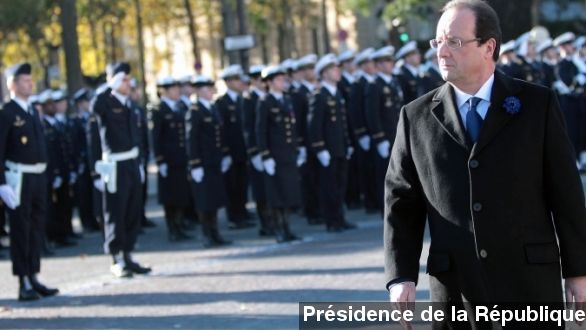 Nov. 11 is Armistice Day in France — the anniversary of the end of World War 1 — and French president François Hollande marked the occasion with a memorial service for the country's fallen soldiers. But the ceremony didn't quite go according to plan.

Protesters jeered Hollande's motorcade as he made his way to the Arc de Triomphe to lay a wreath of flowers at the Tomb of the Unknown Soldier. About 70 demonstrators were detained after scuffling with police. (Via France 2, Al Jazeera)

Unfortunately for Hollande, his administration's troubles aren't limited to an extremist opposition.

Recent polls show Hollande's approval ratings have plummeted to 26 percent, the lowest recorded level of any French president in history. The Guardian notes Hollande's administration is frequently portrayed as "indecisive and lacking in authority or coherent policies."

Hollande's critics have blasted the government's failure to repair the economic damage caused by the financial crisis of 2009. Standard and Poor's recently downgraded France's credit rating to AA, citing the country's inability to boost growth. (Via The Telegraph)

The president's defenders claim most of the country's economic woes were the work of Hollande's predecessor, Nicolas Sarkozy. One Socialist politician told The Independent it's Hollande's reserved public persona that makes him a target.

"The core of the problem is Hollande's own personality. ... He wanted to create a kinder, gentler, less frenetic presidency after Sarkozy. Instead, he is often absent when he should have been active or gets involved too late and makes things worse."

Nov. 11 proved to be a dark day for politicians across France. During an unrelated local Armistice Day ceremony, three French politicians were attacked and injured by a man with a knife.