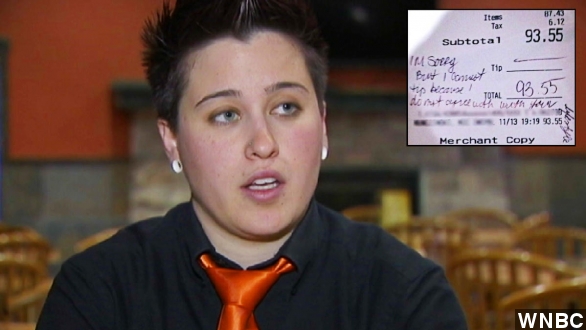 Waitress Dayna Morales claims she was denied a tip because she's a lesbian. Now, several of her friends are saying her credibility is questionable.

... after claiming a table she was serving refused her a tip because she was a lesbian. Well, now several of Morales’ friends are speaking out, calling her a quote “compulsive liar.” (Via KSTU)

Kiersten Bremer, an alleged former friend of Morales told The Daily Caller the 22-year-old ex-Marine has lied several times over the past few years, and they were quite extreme. Like, that her father raped and got her pregnant, then she got cervical cancer, which killed the fetus.

Allegedly, Morales later admitted she made the entire story up. And, it doesn’t end there ...

Former coworkers of Morales told The Journal News Superstorm Sandy sent a boat through her living room, but when the concerned friends stopped by to check on her, there was only minor damage to the home.

And, others have said she exaggerated her stories about what she did while serving in the Marines as well. (Via Fox News)

Morales posted this picture of a receipt with a handwritten note that she claims the couple dining with two kids wrote. It said "I’m sorry, but I cannot tip because I do not agree with your lifestyle and how you live your life." (Via International Business Times)

One family has anonymously claimed that was their receipt and says Morales’ claims are untrue. They say they didn’t write that note and even left her an $18 tip. (Via NBC)

To prove their story, that family also provided a copy of a receipt that looks the same, and was printed at the same minute of the one Morales posted. They also showed a copy of their Visa bill showing the total charge of the tab plus an $18 tip. (Via WOAI)

And an ex-girlfriend says she has poems written by Morales that would show they match the handwriting on the receipt. (Via The Journal News)

Morales received donations after posting the photo, which she said would all go to the Wounded Warriors Project.

The waitress has maintained she did not forge the note. Her parents have spoken out to WJW in her defense saying you can’t stop people from being skeptical when a story goes viral, but their daughter is not a liar. (Via WJW-TV)

The restaurant she works for says it is conducting its own internal investigation.