Why 2020 Election Skeptics Want To Be Poll Workers And Watchers 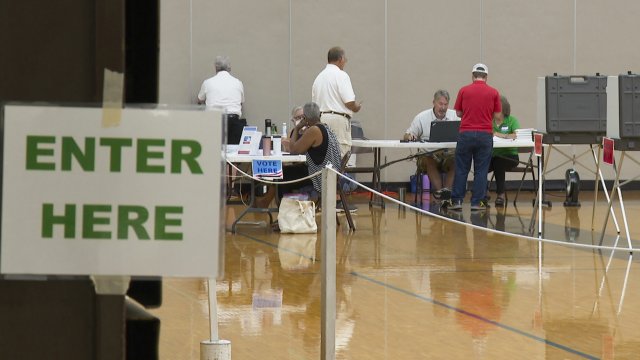 Pennsylvania offers a window into why doubters and deniers of the 2020 presidential election want to serve as poll workers and watchers.

This is poll worker training day.

Dozens of poll workers go through a dry-run of procedures before voting starts in Pennsylvania, a state with a close U.S. Senate race that could determine which party controls the chamber.

For many, the training is a refresher course.

Barbara Rieck served in her first election 10 years ago.

“I'm a glutton for detail,” says Rieck, a retired pharmaceutical supplies coordinator. “Handling the paperwork for the election is fun for me.”

There are also new poll workers in the mix.

Lisa, who declines to share her last name, says she signed up partly because of doubts about the last presidential race.

Does she think the 2020 election was stolen?

Working the election will help her believe voting is secure, she explains.

“Because when I'm seeing it, I believe it and I know what's happening for real,” Lisa says. “When I'm not seeing something, it's hard to believe because you're not seeing it.”

Groups spreading false information about the 2020 election are encouraging supporters to get involved in the voting process this year.

Audit The Vote PA claims, baselessly, that the 2020 election was stolen.

Toni Shuppe, the group’s leader, turned down Newsy's request for an interview.

Shuppe has said enlisting poll workers and watchers is one of the most important ways to ensure voting is fair.

“The mainstream is trying to paint us all as election deniers and crazy kooks,” Shuppe says in a video posted to Audit The Vote PA’s Facebook page. “All we want is an accurate count at the end of the day, and for both parties to be able to walk away from the election comfortable that the certified result is going to reflect what the voters wanted.”

Unlike poll workers, who check in voters and handle ballots, watchers observe voting.

Audit The Vote PA says it has trained 6,000 people to serve as poll watchers this year.

“Does it deter fraud necessarily? No. But I have to believe that just having eyes in there, if somebody has been paid to stuff the ballot box in their precinct, they'll think twice if there's eyes on it,” Shuppe says in another video posted to Facebook.

There have been isolated reports of aggressive observers causing disruptions in the name of election integrity.

A report from Pima County, Arizona, described an increase in private citizens during primary voting this summer “demanding to gain access to our facilities to observe. Sometimes these individuals were loud, actively filming or otherwise harassing voters and/or early voting site workers.”

Election officials across the country tell Newsy they are aware misinformed poll workers and watchers could cause trouble.

“We do have concerns that, they're obviously, they're coming in with known biases,” says Carly Koppes, clerk and recorder for Weld County, Colorado.  “They're having a set goal of trying to find what they believe are flaws and fraud in our election process.”

Election officials say they often know less about the poll watchers planning to be in precincts compared to poll workers.

While Pennsylvania county boards of election certify official observers, they come from political parties and candidates and may not go through the rigorous coaching of a poll worker.

“Since poll watchers are recruited by the candidates and the campaigns directly, I don't get an opportunity to interface with them one-on-one or in a setting like this ahead of the election,” Montgomery County Voter Services Director Dori Sawyer tells election workers gathered for training.

Sawyer says instructions for poll watchers are printed on the back of their certificate “to assist with setting expectations.”

She and other local voting officials contacted for this story expressed faith that common safeguards in polling places should keep voting secure.

As in many states, Pennsylvania strives for a bipartisan split among poll workers.

Watchers must stay in a designated space away from voters.

Precincts have an election judge with the authority to remove anyone who tries to intimidate a voter or gets too close to someone casting a ballot.

“I'm confident that if any issues do arise, that our team is primed and ready to tackle whatever comes our way," Sawyer says. “Handle it with grace, and swiftly, and efficiently.”

Working or observing an election can turn a skeptic into a believer of the process, Sawyer says.

“I think that the closer that people get to something that they have questions about,” she says, “the more that they see that there's nothing to see.”

Being a poll worker for the first time this spring and going through hours of training have been eye-opening for Lisa, who questioned the accuracy of the 2020 election, and says she’s not part of Audit The Vote PA.

"When you're on the other side of the table, so to speak, it's really different,” Lisa says at the end of the poll worker training session.

She now feels better about the outcome of the 2020 vote.

“Because of all the accountability, the checks and balances and things like that,” Lisa says. “It's really hard to, you know, kind of rig it.”