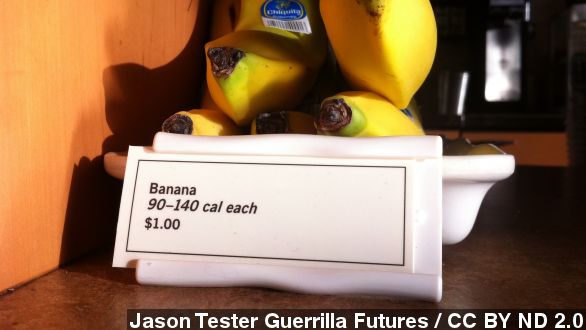 The US FDA is announcing new calorie rules on Tuesday that will require everywhere from theaters to vending machines to include calorie counts.

You can run, but it's getting harder to hide from knowing exactly how many calories are in whatever you're eating.

On Tuesday, the U.S. Food and Drug Administration will update its rule book, requiring everything from movie theaters to vending machines to include calorie counts on their menus.

The new rules, required under the Affordable Care Act, are meant to fight growing obesity in the U.S. (Video via YouTube / SlimGenics)

The move has been praised by some activists. A public health professor at New York University told The Washington Post, "This is great news for public health and, hopefully, an incentive to restaurants to reformulate their offerings to be lower in calories.”

FDA Commissioner Margaret Hamburg was equally positive saying “This initiative is really all about trying to provide consumers with information that they can use to make more informed food choices for themselves and their families."

Still, not everyone is thrilled they'll have to start showing customers just how much they're consuming.

One example: movie theaters. One of those large tubs of buttery popcorn can hold up to 1,200 calories according to WebMD.

According to The New York Times, the Obama administration received a lot of pushback from both theater and pizza chains who weren't keen on sharing calorie counts. A research fellow with the Heritage Foundation told the Times the new rules amounted to "a shocking power grab."

But, the new rule set has its allies in the industry, too. The Wall Street Journal says the National Restaurant Association was in favor of the changes and more than 200,000 restaurants throughout the U.S. will have to update their menus now.

Whether adding calories to menus actually changes peoples' eating habits is still up for debate though.

Some point to a 2008 Starbucks study by Stanford that found out of 100 million transactions, displaying calorie counts only resulted in about a 6 percent drop in average calories purchased. (Video via Starbucks)

The new rules will be announced on Tuesday with restaurants and other businesses having one year to implement the changes and vending machines two years.

This video includes images from Getty Images and jayneandd / CC BY 2.0.