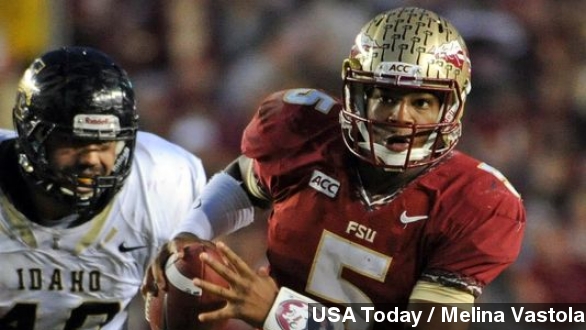 Winston beat all other contenders to become the youngest Heisman trophy winner in the award's history.

At just 19 years and 342 days old, the Alabama native also became the second freshman in history to receive the award — the first being Johnny Manziel in 2012, who was on hand for Saturday's festivities. (Via Florida State University)

Winston led the No. 1 FSU Seminoles to a 13-0 record, while finishing the season with 3,280 yards passing and 38 touchdowns with only 10 interceptions. (Via WOFL)

He approached the podium visibly overwhelmed and said the trophy wasn't just a mark of personal accomplishment.

"This Heisman isn't just for Jameis Winston. This is for Florida State. I love everybody in here ... I mean, I'm so blessed right now." (Via ESPN)

The Florida State QB ran away with the ballot, earning 2,205. He bested Alabama quarterback AJ McCarron, who earned 704 points. But a sexual assault case almost derailed Winton's chances of taking home the trophy Saturday night and his career.

Sexual assault charges were being sought against Winston by a female FSU student. The accuser claims Winston raped her last December while intoxicated. Winston's DNA was found in the woman's clothes. (Via CNN)

Florida officials later said they would not be pursuing charges, partly because of a lack of evidence. Winston claimed his sexual encounter with the student was consensual and reiterated that during a pre-Heisman news conference Friday. (Via News 12 Long Island)

According to The New York Times, Winston said, “I knew I did nothing wrong. That’s why I knew that I could respect the process and I’d eventually be vindicated. It was more about me being silent for my family, because I didn’t want to put my family in those situations.”

The new Heisman winner and the Seminoles will take on the Auburn Tigers in the BCS National Championship game Monday, Jan. 6.