Fugitive Caught After Alleged 'Catch Me If You Can' Tweet 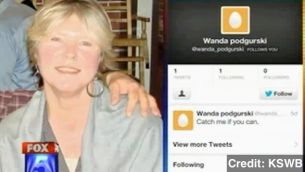 Wanda Podgurski, 60, was convicted of 29 felonies. But she wasn't there to hear the verdict.

Remember that movie “Catch Me if You Can” starring Leonardo Dicaprio?

It was based on a true story of this guy, Frank Abagnale, Jr, and how he became one of the most famous imposters and escape artists in history.  (Via NBC/ To Tell the Truth)

Well, there’s a reason they made a movie about him — and a San Diego woman learned that the hard way. After skipping trial and allegedly taunting police with a “catch me if you can” tweet, guess what, she got caught.

“In January 60-year-old Wanda Podgurski was convicted of 29 felony counts related to the scam in which she faked injuries and collected payments of more than $650,000 from insurance companies.” (Via XETV)

But when the verdict was read she wasn’t there. She was on the run.  (Via KSWB)

In June she allegedly tweeted her taunting message — “Catch me if you can.” Three weeks later she was found and arrested in Mexico by the Fugitive Task Force. (Via Los Angeles Times)

Her phone was tracked reportedly pretty easily because on Twitter geotags are attached automatically — which Podgurski must not have known because she never disabled her smartphone’s GPS. (Via Mashable / Fast Company)

But what if the account is a fake? We should note one thing about the Twitter account being referenced by a number of major media outlets. Podgurski was arrested on the fourth of July and is currently behind bars...

“How dumb am I? Who would go to Mexico. So close yet not far at all.”

“Hmmmm what to eat in jail this morning? Do you have organic coffee.” And one of the most recent from late Tuesday morning “Obviously i am not tweeting from jail...this account has served its purpose...and had nothing to do with my capture.”

Well someone, somewhere is right about that as convicted felons don’t typically have free range to cell phones while sitting in a jail cell. We’d guess the account was probably hacked or is being used as a prank.

But no matter. On Monday Podgurski pleaded not guilty to a felony charge of failing to appear in court while on bail. (Via Daily Mail)

So what lesson have we learned from this? Life isn’t a movie? Or — how about if you’re going to run leave the phone at home? Ok, maybe just don't run.