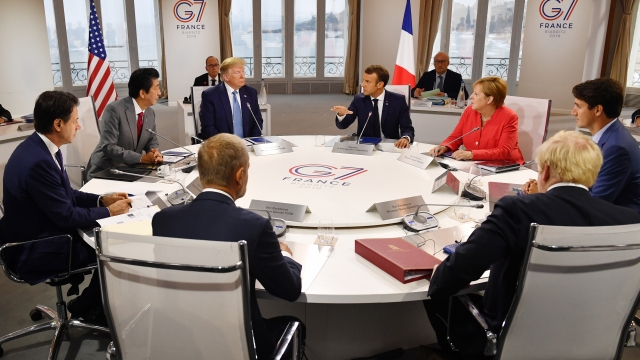 The weekend's G-7 summit left issues about climate, nuclear deals and the economy up in the air.

The G-7 summit ended without agreement on climate change after President Trump skipped a meeting on the topic, sending another official to sit in for him.The White House blamed a scheduling conflict. Still, G-7 leaders agreed to give $20 million in both technical and financial help to Brazil to help it fight wildfires in the Amazon.

French President Emmanuel Macron called for an end to trade deals between Brazil and the European Union over its handling of the fires. But that idea does not have widespread support across the EU. Notably, the British and German leaders support existing ties.

President Trump focused his attention on the global economy and whether an end to the trade war with China is in sight. At one point, he said he wishes tariffs were higher. Then he said he is willing to negotiate.

Before the G-7 summit began, the U.S. had already announced that trade talks with China would resume next month.

President Trump also criticized Iran and the Iran nuclear deal. French President Emmanuel Macron said he wants to see the deal saved and even took the surprising step of inviting the Iranian foreign minister to the host city of Biarritz, France.

The country's president, Hassan Rouhani, says he is open to a meeting with President Trump. President Trump initially said he would be open as well, but not until Iran is a "good player."

Macron says he hopes the meeting will take place within the next few weeks.