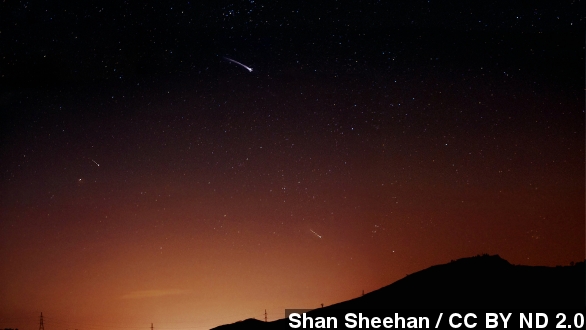 Geminid meteors will light up the sky Saturday night into early Sunday morning for one of the best meteor showers of the year.

It's that time of the year again. No, I'm not taking about Christmas, I'm talking about meteors.

Each December, Earth passes through the cloud of debris produced by rock comet 3200 Phaethon, resulting in arguably the best meteor shower of the year — the Geminid shower.

This year's shower will peak Saturday night into Sunday morning and NASA says as many as 100 to 120 meteors will fall per hour.

3200 Phaethon is believed to have come from the asteroid belt and produces a tail of debris when its orbit takes it too close to the sun.

The Geminid meteoroids got their name because they appear to fly out of the constellation Gemini.

NASA explains Geminids are very dense and are able to penetrate deep into the atmosphere, producing bright and visible "falling stars."

Some of the meteoroids are so dense they could even make it to the Earth's surface.

Last year, the moon was so bright the shower was hard to see, but this year the moon is waning and should allow more visibility for the meteoroids.

Experts say for best viewing, get away from city lights, find an elevated spot to watch the show and give you eyes plenty of time to adjust to the dark. But, if you don't want to brave the cold to watch the shower, there are other options.

NASA is providing a Ustream feed from a telescope at its Marshal Space Flight Center in Huntsville, Alabama. The agency is also hosting an overnight web chat to answer questions.

Slooh.com also will have live visual and audio feeds of the shower.