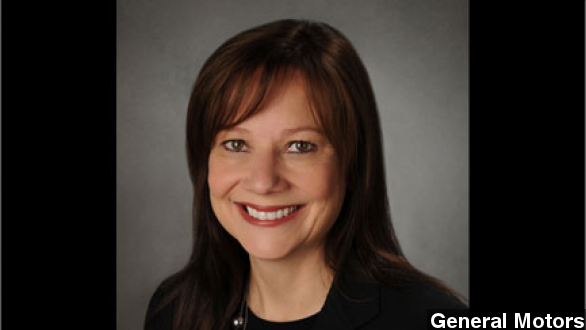 It’s a historic day for not only General Motors, but for the entire car industry. For the first time ever, a woman has been named CEO of a major U.S. automaker.

Meet Mary Barra. She has a bachelor of science and electrical engineering and an MBA from Stanford. “Automotive, it’s kind of in my blood. … My dad was a dye maker at General Motors for about 39 years.” (Via Fortune)

FORMER GENERAL MOTORS VICE CHAIRMAN: “It’s obvious that a powerful and intelligent female with experience can do as well as a male. I’m the father of four daughters so I kind of welcome this collapse of the glass ceiling.” (Via CNBC)

Fifty-one-year-old Barra replaces Dan Akerson after he retires and will take over Jan. 15. So, how did she get started at GM? Well, from the floor up of course.

"She started, I love this, as an intern on the factory floor at the age of 18 to help pay tuition. ... She said it's about no kidding results. And no kidding is right, she's been leading in GM's turn around since the company emerged from bankruptcy." (Via CNN)

GM's announcement comes just one day after the U.S. Treasury Department sold the last of its interest in the company. Akerson was appointed CEO in 2009 by the Obama administration and has helped transform the company. It will be Barra's job to keep it on track. (Via Businessweek)

Of the transition Barra said, “With an amazing portfolio of cars and trucks and the strongest financial performance in our recent history, this is an exciting time at today’s GM ... I’m honored to lead the best team in the business and to keep our momentum at full speed.” (Via Business Insider)

Barra is No. 35 on Forbes' list of World's Most Powerful Women.

And for the record, she is married with two children.