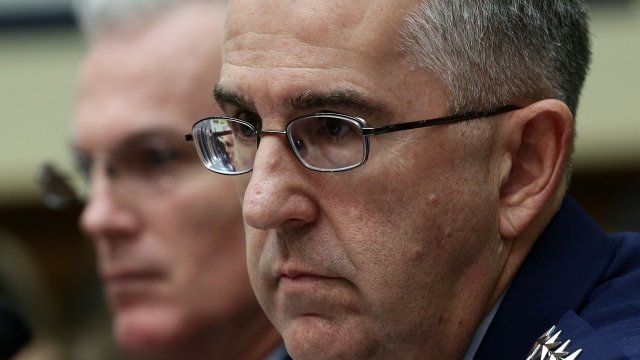 There are checks and balances to keep impromptu presidential orders from going through automatically.

The head of the U.S. Strategic Command, or STRATCOM, said Saturday he would say no to a nuclear strike order from the president if he had to.

Speaking at the Halifax International Security Forum, Gen. John Hyten said: "I provide advice to the president. He'll tell me what to do, and if it's illegal, guess what's going to happen? I'm going to say, 'Mr. President, that's illegal.' Guess what he's going to do? He's going to say, 'What would be legal?' And we'll come up with options of a mix of capabilities to respond to whatever the situation is, and that's the way it works. It's not that complicated."

His comments come just days after a bipartisan Senate hearing on the issue, the first of its kind in more than 40 years.

North Korea Has 'Already Heard Enough' When It Comes To Trump

Democratic Sen. Chris Murphy said at Tuesday's hearing, "We are concerned that the president of the United States is so unstable, is so volatile, has a decision-making process that is so quixotic that he might order a nuclear weapons strike that is wildly out of step with the U.S. national security interests."

Hyten's statements seem to echo testimony given by the former head of STRATCOM, Gen. C. Robert Kehler. Kehler said: "The United States military does not blindly follow orders. ... The nuclear decision process includes assessment, review and consultation between the president and key civilian and military leaders."

All this comes as the back-and-forth between North Korea and U.S. President Donald Trump becomes increasingly volatile. But the point national security experts seem to be driving home is that no president could force a nuclear strike without some sort of oversight.

Former National Security Council adviser Peter Feaver, who spoke at Tuesday's Senate committee hearing, told Vox that even if a strike were ordered, officials would "likely halt the process and get some clarity" before making any moves.