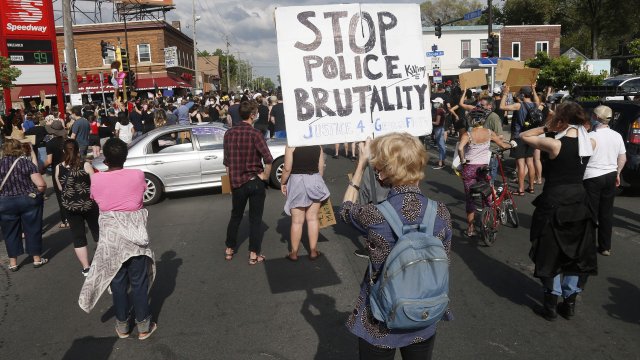 The FBI said it will present its findings to the U.S. Attorney's Office for the District of Minnesota.

The family of George Floyd, an African American Minneapolis man who died after being detained by police Monday, is calling for the four officers involved to be charged with murder.

"We need justice for my brother. They need to be convicted of murder," Philonese Floyd, Floyd's brother said.

Police said Floyd was detained after allegedly trying to use a counterfeit bill in a store. In a graphic video recorded by bystanders, a police officer can be seen pinning Floyd to the ground with his knee on his neck, holding it there for at least seven minutes. During that time Floyd can be heard saying he couldn't breathe before falling silent and later declared dead at a hospital.

The four police officers involved in the detention of Floyd were fired Tuesday and the FBI is investigating the incident.

"Firing them is a good start. But we want to see justice for our family. We want to see them charged," Tera Brown, Floyd’s cousin said.

The incident has sparked backlash across the country, with many drawing parallels between Floyd and Eric Garner’s death in 2014.

On Tuesday night, protesters gathered outside a Minneapolis police station and eventually clashed with officers, with police using tear gas to break up the crowd. Others gathered near where the incident occurred.

On Wednesday, civil rights lawyer Ben Crump — who is representing Floyd's family — shared surveillance video taken as Floyd was being detained. He said Floyd was "clearly NOT RESISTING arrest... So WHY did Minneapolis Police officers use excessive force that ultimately resulted in his death?! WE DEMAND ANSWERS."

According to CNN, the FBI said it will present its findings to the United States Attorney's Office for the District of Minnesota for possible federal charges.