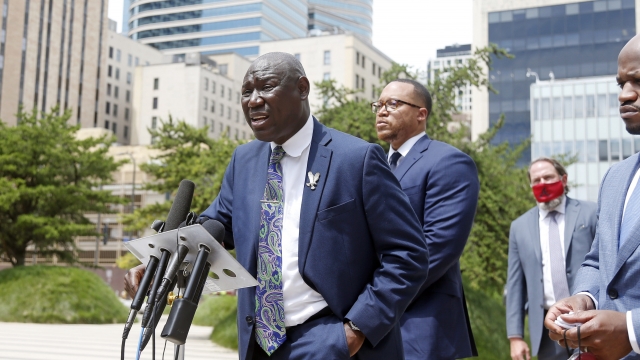 The lawsuit seeks compensatory and special damages and asks officials to appoint a third party to make sure police are well trained and supervised.

George Floyd's family is filing a civil lawsuit against the city of Minneapolis and the four former police officers charged in his death.

Attorneys representing the family made the announcement on Wednesday. The suit alleges Derek Chauvin, J. Alexander Kueng, Thomas Lane and Tou Thao violated Floyd's rights when they restrained him and that the city tolerated a culture of excessive force, racism and impunity within its police department.

The lawsuit seeks compensatory and special damages in an amount to be determined by a jury. It also asks that the city appoint a third-party official to make sure Minneapolis properly trains and supervises its officers moving forward.

Floyd family attorney Ben Crump said the city "has a history of policy and procedures ... that cries out for training and discipline."

"It was not just the knee of officer Derek Chauvin on George Floyd's neck for 8 minutes and 46 seconds, but it was the knee of the entire Minneapolis Police Department on the neck of George Floyd that killed him."

Floyd's death sparked protests across the country and around the world. Demonstrators chanted "Black Lives Matter" while demanding racial justice and an end to police brutality. Attorney Chris Stewart says politicians, the mayor, the governor and city council have recognized Floyd was tortured and understood that Black lives matter, but he said the city should have to take on financial responsibility for his death, too.

"And cities and companies only talk in dollars bills, sadly. ... If you do think that Black lives matter, then understand that we're going to make sure there is a Black worth and value behind that. We're not walking away silently anymore after arrests."

Another attorney representing the family, Tony Romanucci, said the training policies that were bargained into the police union contract don't hold officers accountable.

"Police, we know, are allowed to use force, but only commensurate with the use of force used against them. ... If you don't change the use of force policies and, and train, you will have continued failures as in the death of George Floyd."

Crump said he hopes this case sets a precedent so that "police won't wrongfully kill marginalized people" in the future.

"We would have hoped that George Floyd did not have to sacrifice his life to bring about these changes, but now we're here, and we're at a tipping point, Minneapolis."

Additional reporting by Amy Forliti of The Associated Press.