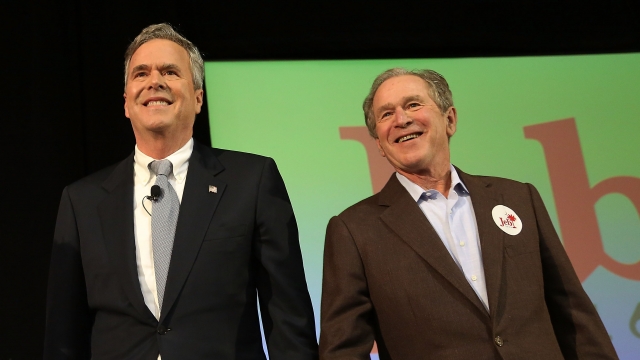 Last year, Jeb Bush said he wanted to be his own man and avoid his family ties. But now, his brother George is campaigning with him in South Carolina.

Jeb Bush was initially hesitant to bring his family ties out on the campaign trail. A year ago, Bush said he wanted to blaze his own trail without the help of his brother or father.

"I admire their service to the nation and the difficult decision that they had to make. But I’m my own man, and my views are shaped by my own thinking and my own experiences," Jeb Bush said at a speech at the Chicago Council on Global Affairs.

But now that the former Florida governor has found himself in fifth place in the polls heading into the South Carolina primary, he’s changed his tune.

The 43rd president made his first campaign appearance on behalf of his younger brother Monday, directing thinly-veiled criticisms at front-runner Donald Trump.

"In my experience, the strongest person usually isn’t the loudest one in the room," George W. Bush said.

In the most recent Republican debate, Trump repeatedly slammed George W. Bush's presidency, focusing on the Iraq War and the Sept. 11 attacks.

"The World Trade Center came down during your brother’s reign. Remember that," Trump said.

While Trump is still dominating the GOP field, Jeb Bush supporters are optimistic that the 43rd president can grab some evangelical voters away from the rest of the pack.

South Carolina Sen. Lindsey Graham also attended the rally and said: "The Bush family has a history with evangelical voters that is large and deep. The family is beloved here. Dubya is coming."

This video includes images from Getty Images and clips from The Washington Post, CNN, C-SPAN, Jeb 2016 and CBS.