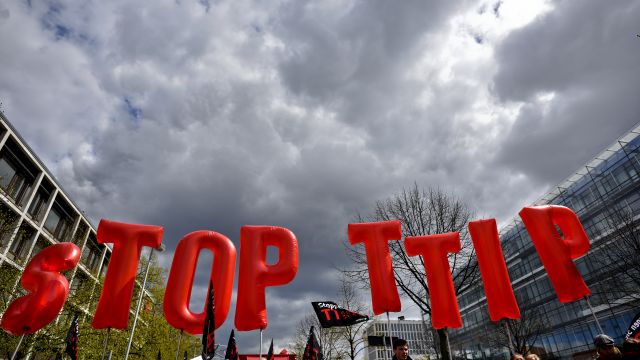 The TTIP would establish closer trade ties between the U.S. and EU — but protesters are worried the deal could have side effects.

President Obama's trip to Germany is in part to promote the Transatlantic Trade and Investment Partnership, a trade deal he says will create millions of jobs. On Saturday, a reported 35,000 protesters of the agreement disagreed.

Protesters held up signs and hung banners on the sides of buildings to make their opinion of the TTIP known. The proposed deal between the U.S. and the EU would create the largest free-trade area on the planet and make it easier for the U.S. and countries in the EU to get into each other's markets.

According to NBC, the protest was organized by trade unions, environmental activists and church groups that are worried about "environmental and legal standards."

Unlike in the U.S. where anti-trade rhetoric is heavily tied to jobs being lost, anti-TTIP protesters in Germany are focused on more than the economy. One expert put it this way: "Criticism in Germany has often focused on an increase in what is perceived as undue corporate influence, a feared lack of democratic control."