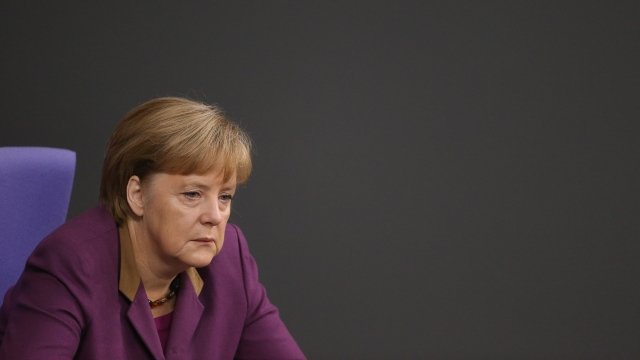 Some have compared the AfD to the Nazi party, and its members' rhetoric hasn't done much to quell the accusations.

Far-right political party Alternative for Germany will likely win seats in the German Parliament this month, and members of the establishment aren't sure how to handle it.

It would be the first time members from a far-right party made it to the country's Parliament since the National Socialist German Workers' Party, more commonly known as the Nazi Party, fell at the end of World War II.

The AfD grew to be Germany's third-ranked party in the polls, largely by playing on anti-immigrant sentiment amid the Syrian refugee crisis. While the Nazi comparison may sound like a stretch, critics have pointed to controversial remarks made by AfD leaders — like calling Berlin's Holocaust memorial a "monument of shame" and saying Germans have a "right to be proud" of German soldiers who served in both world wars.

Members of the Bundestag have been working on ways to diminish the AfD's role if it does win seats. And there are reports that no one is willing to sit by AfD members.

Germans will vote Sept. 24 for the party they want to see in power. Current odds have Chancellor Angela Merkel's party, the Christian Democratic Union of Germany, maintaining its role as the largest party.

But the AfD only needs 5 percent of the vote to send members to the Bundestag. The party has been sitting around 10 percent support, according to polls.