Doctors: Get Your Flu, COVID Vaccines Now To Be Safe During Holidays 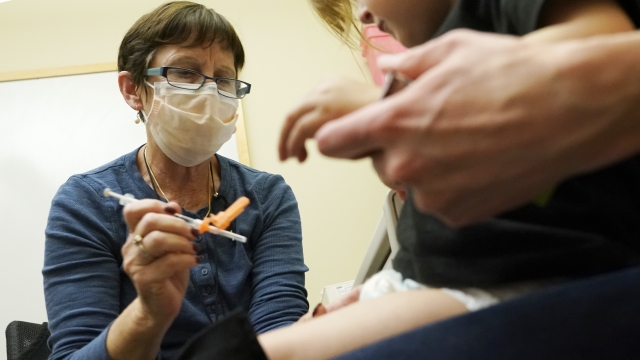 There's more room for the flu and COVID to spread as restrictions subside, but not as many people are up to date on their vaccines either.

Devon McKoy is one of the millions of Americans who have had the flu this year.

"It started about last week, and then it was just nothing but coughing, lots of fever, chills," McKoy said. "From what the doctors have told me, it's just going rapid everywhere."

The CDC has counted about 8.7 million flu illnesses, 78,000 hospitalizations and 4,500 flu deaths since the season started late summer/early fall.

"We're still very early in the season, and the rate of flu hospitalizations at this point is the highest that we've seen in more than a decade," said Dr. Chastity L. Walker, senior adviser for health equity at the CDC's National Center for Immunization and Respiratory Diseases.

The number of those getting a flu shot is also lower than years past, though medical organizations are pushing Americans to get them. The CDC, Ad Council and the Americian Medical Association are also focusing on racial disparities and those concerned about cost.

"In many states, Medicaid and other plans cover it," said Dr. Willie Underwood, member-elect of the American Medical Association's Board of Trustees. "But there's also campaigns like... GetMyFluShot.org: You can find a location near you, hopefully where you can get a reduced cost or even free."

Experts Are Expecting A Rise In Flu Cases Post-Thanksgiving

COVID, flu and RSV cases had already been on the rise, but the holidays are expected to cause even higher numbers.

The CDC says the flu shot can reduce the risk of going to the ICU by up to 82%. After getting the vaccine, it takes an immune system about two weeks to prepare for fighting the virus. Getting the flu shot now would mean it's settled by the middle of Hannukah and a few days before Christmas and the start of Kwanzaa.

Dr. Jamie Garfield is an ICU pulmonolgist in Philidephia. She said she cared for many flu patients over Thanksgiving.

"Most of them were unvaccinated, or they were vaccinated, but they had one or more chronic medical illness — diabetes, hypertension, heart disease, asthma, COPD is very common," Dr. Garfield said. "Then I had family that I'm living with who were both diagnosed with COVID, so it's just been kind of crazy."

It's the same timeline for the COVID-19 vaccine. A shot leads to full protection in two weeks.

COVID hospitalization rates are rising as new variants BQ.1 and BQ1.1 are driving rising cases numbers. They're under the family tree of Omicron, meaning the updated COVID booster is the best protection from getting severely sick.