Ghana Has Made Education A Priority, And Now It's Paying Off 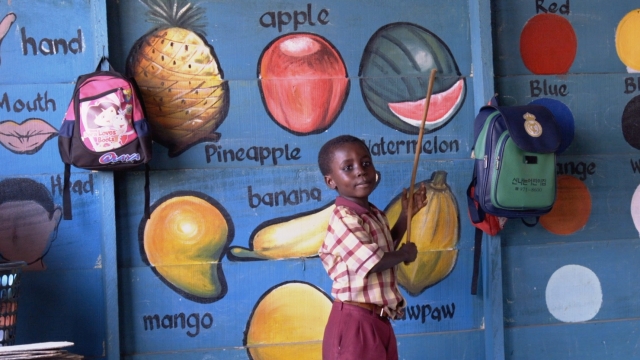 Ghana has achieved 90 percent enrollment in primary education — one of the highest rates in West Africa.

Back in 2000, the United Nations set a goal of universal primary education for the globe with the hopes of breaking developing nations out of a cycle of poverty.

"The future is bleak for any child, I believe globally for any child that doesn't have access to education," said Eugenia Tachie-Menson, director of a national Ghana literacy program.

Since that time, Ghana has been a notable standout, not only in West Africa but around the world.

In less than 10 years, Ghana has pushed its enrollment in primary education around the country past 90 percent — one of the highest rates in West Africa.

Meanwhile, Liberia has struggled to get enrollment over 40 percent, and Nigeria's enrollment sits at just below 65 percent. Ghana only trails the United States by less than 3 percentage points.

A 10-Year-Old National Spelling Competition In An Unlikely Place

In a country with dozens of dialects and languages, this organization has held an English-language spelling bee for the last 10 years.

This newfound emphasis on education has had the biggest impact on Ghanaian kids. While the adult literacy rate for Ghana is just 72 percent, for youth (between the ages of 15 and 24), it's 90 percent.

"… Learning is actually not limited to the classroom. It also happens outside of a classroom, and it probably is the better way to get children to enjoy better subjects," Tachie-Menson said.

But for so many kids whose parents are farmers and fishermen, they have to work instead of going to school because the family needs the help.

Enrollment drops by more than a third from primary school (91 percent) to secondary school (58 percent).

Two-thirds of Ghana's 26 million people are farmers, and when students become working age, many pick up a trade rather than continuing their education. In addition, finding properly trained teachers is a barrier in poorer areas of the country.

About half a million kids are still being left out of primary school education, according to UNICEF.

Tachie-Menson says these factors are what makes extracurricular education programs so helpful for Ghanaian kids.

"If we said to children, 'We're running an English program,' they probably wouldn't be interested. But since we're running a spelling bee, that they want to do. The fact that we're able to impact on a generation's life through something as basic as reading — or let's say literacy — means a lot," Tachie-Menson said.