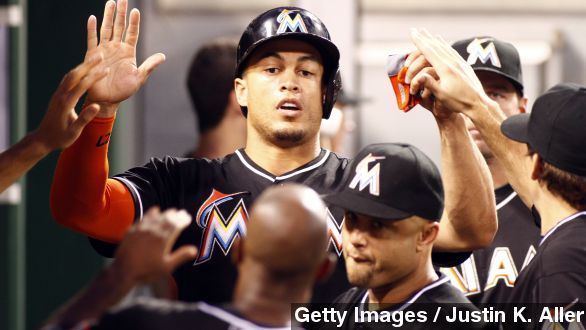 It's a deal for the record books, all because the Miami Marlins believe this guy will be very prominent in those record books.

CBS Sports reports the Miami Marlins and outfielder Giancarlo Stanton have a 13-year, $325 million deal in place, which averages out to about $25 million per season. It's expected to be signed and announced by the end of the week.

Now, it's the $325 million sum of the 25-year-old's contract that's breaking records, not the average annual value. That's big money for such a young player, especially when others have accomplished much more before receiving such a lucrative deal.

As mentioned, Yankees third baseman Alex Rodriguez signed that deal at age 32 in 2004 after amassing 345 home runs over 10 previous seasons. Stanton, right now, sits at 154 HRs and a .271 batting average over a small sample size of five seasons.

And, as this SportsCenter tweet points out, Los Angeles Angels of Anaheim slugger Albert Pujols had 445 HRs before signing a massive $240 million deal.

Although baseball writers seem to be split on the decision to pony up so much money, only Stanton's performance will decide whether the deal is a bust for Miami.

But it's a somewhat surprising one for Stanton who, as recently as August, seemed fed up with the Marlins organization.

According to the CBS report, Stanton's deal features a no-trade clause and a five-year opt-out for the 25-year-old.