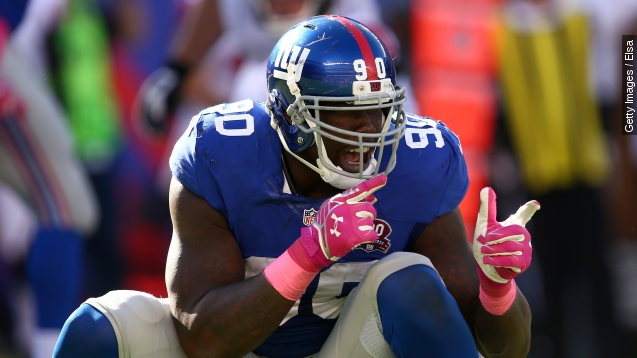 Months after he lost his index finger in a fireworks accident, Jason Pierre-Paul is suiting up for the Giants.

Giants defensive end Jason Pierre-Paul still only has nine fingers after losing one in a Fourth of July fireworks accident. But on Sunday, he’ll be back in uniform for the first time since his injury.

"The day I walked in here, I already won," Pierre-Paul told reporters October 30. "People said I was going to be out for the whole season, and I knew what kind of effort I put in in the offseason, way before this happened. So just coming back, I already won."

Pierre-Paul stayed away from the Giants for the first chunk of the season, initially turning down a contract offered before the injury out of fear the Giants would deem him unfit to play, and dock his pay. (Video via CBS)

But JPP returned to the practice field a couple weeks ago, after team doctors finally said he was ready, and the two sides agreed to a new contract -- one that features a few incentives. (Video via SNY)

For instance, for Pierre-Paul to earn the same amount of money per game he’d earn under the contract he reportedly rejected, he’ll have to record at least 10 sacks over the remaining 8 games in the Giants' regular season, no easy feat.

Pierre-Paul was on a mission to return to the Giants ever since his accident, posting workout videos to Instagram as a way of assuring people he’d be back on the field soon. (Video via Instagram)

That doesn’t mean everything will be just as it was before the accident for JPP. For one thing, he’s been experimenting with a few four-fingered gloves to wear on his injured hand. (Video via WNBC)

The jury is still out on how JPP’s play will be impacted because of the injury, but Pierre-Paul insists his skill set is still there, once tweeting he couldn’t remember ever using his index finger to get a sack.

No matter what, Pierre-Paul’s return is welcome news to his teammates. The G-Men have struggled all year at getting to the quarterback, ranking last in the NFL this season with just nine sacks.