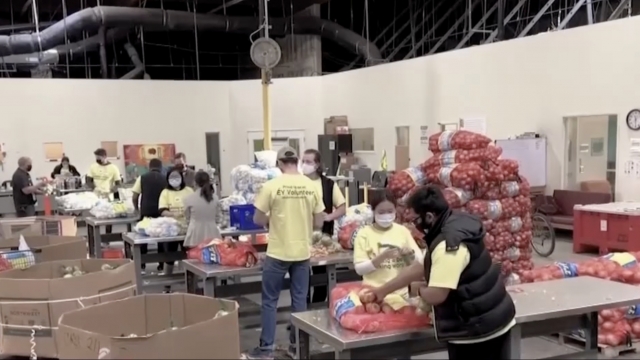 The campaign was launched in 2012 as a way to get people to donate to charity at a time when they were already spending money on holiday shopping.

In the past 10 years, charities have made splashy fundraising appeals and raked in billions in donations on GivingTuesday, which takes place the first Tuesday after Thanksgiving.

Last year, American donors gave nearly $2.5 billion amid growing needs brought on by the COVID-19 pandemic and the nation's racial reckoning. How much money will flood into charities this Tuesday is anyone's guess.

The giving campaign was launched in 2012 as a way to get people to donate to charity at a time when they were already spending money on the holiday shopping season. The 92nd Street Y, a community center in New York City, came up with the idea and developed it until two years ago, when a separate organization called GivingTuesday took up the mantle to organize the giving day.

Charities typically host fundraisers, events, and use the hashtag on social media to garner donations, which have increased throughout the years. But it's not a fundraising day — it's a generosity movement, said Asha Curran, the CEO of the organization that promotes the campaign.

Curran says people are gearing up to participate in ways that don't involve giving money. For example, she says more than 40,000 young people worldwide have indicated to GivingTuesday's youth-oriented GivingTuesdaySpark program they're doing "acts of giving and acts of kindness" on Tuesday.

The AP recently talked with her about the campaign, younger donors and other things. The interview was edited for clarity and length.

AP: The campaign is marking its 10th year. Do you feel like it's accomplishing what it initially set out to do?

ASHA CURRAN: I think it's accomplishing a great deal more than it set out to do. In 2012, the idea was really a relatively simple one: a hashtag to encourage people to think about giving back after two days of consumption. It was very U.S.- and fundraising-focused.

Today, there is an official country movement in 81 countries, the most recent being Peru, South Sudan, Greece and Nepal. People around the world are meeting generosity efforts and using the day as an opportunity to be creative, and think about generosity in very expansive ways. None of those are things that we could have foreseen in the beginning.

AP: Do you believe the level of giving that was seen last year will be sustained?

CURRAN: I stay away from predictions every year. But this year, the god's honest truth is I cannot tell, because giving has been so volatile.

My experience is generous people are generous, and people give in response to the fact that times are hard. Not only because they're helping other people, but because giving is a mechanism for coping with stress and anxiety.

So I think we'll see a huge outpouring of giving, whether that giving manifests as money, and whether it manifests as more money than last year, I couldn't possibly say. Last year's result was 25% higher than the previous year. But GivingTuesday has seen double-digit increases every year it has existed.

AP: Some experts worry that GivingTuesday trains charities to craft their appeals for one-day giving strategies, instead of encouraging them to build longtime donors. And it might also condition people to give only on specific days. Do you think that is a legitimate concern?

Giving in the U.S. has always been concentrated on specific days. In fact, I think GivingTuesday gives us the opportunity to pull back one day: Dec. 31. Giving had been the last thing we think about in the calendar year. GivingTuesday actually gives us a longer time to celebrate the giving season and more opportunities for fundraisers to make the case for their cause in more ways than just fundraising.

AP: Do you then believe it serves as an entry point for more younger people, who use social media more and can easily see fundraising appeals?

What we try to encourage is a type of engagement that gives people multiple ways to become involved. And that seems to be the most successful with young people especially. People really want to feel like their giving is impactful and transformational, and not simply transactional.

So charities need to give people more than one way to activate. People still want to help even when they are financially insecure. I think that's the difference we see between current and prior generations, when perhaps writing a check felt like enough. It doesn't anymore.

AP: There's going to be some joint campaigns run by mutual aid networks and other groups. How will that help?

CURRAN: Collaboration is something that we've been stressing all 10 years that we've existed. And I can honestly say I'm seeing more of it now than I have that entire time. And that is incredibly inspiring. We see organizations coming together for the good of their missions, or a shared issue area or cause. That shared space is more important than their individual brands. And that is very inspiring to givers.