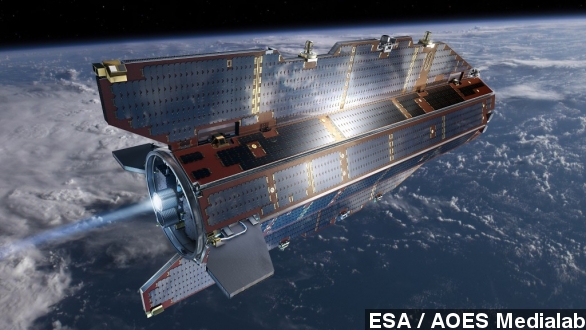 Europe's GOCE satellite came crashing down to earth Sunday evening, ending a four-year mission and days of worry over where it would land.

Good news, everyone. The sky is no longer falling. After days of speculation and suspense over where a European satellite would land, the spacecraft came crashing down to Earth Sunday evening.

The one-ton satellite was a European Space Agency project called the Gravity field and steady-state Ocean Circulation Explorer, or GOCE.  (Via CNN)

It could take a while for NORAD to calculate exactly where the satellite landed, but the BBC reports it was likely somewhere along a path between East Asia and Antarctica.

GOCE launched in 2009, with the goal of mapping Earth's gravitational field. It was originally designed to fly for just 20 months, but continued operating for more than four years before running out of fuel. (Via European Space Agency)

And even then, the 17-foot-long spacecraft wouldn't quit. The space agency's head said GOCE "was still showing an amazing system performance, and dumped highly valuable data to the ground station..." on one of its final passes. (Via Spaceflight Now)

The New York Times reports that about 25 to 45 fragments of the satellite were expected to survive the fall to Earth's surface. The largest fragment would weigh around 200 pounds, which could cause quite a bit of damage if it struck land.

"It's a bit of a risk but exceedingly unlikely, and it's most likely that these pieces will hit the ocean just because the earth is made up mostly of water." (Via Fox News)

But don't expect GOCE's fall to be its only legacy.

A writer for Space.com notes GOCE's nickname was "the ferrari of space," and said "GOCE mapped the globe's ocean currents and lumpy gravitational field in unprecedented detail. The spacecraft also produced the first high-resolution map of the boundary between Earth's crust and mantle."

But if you were at all relieved your Sunday wasn't interrupted by a falling satellite, we have some bad news.

In just a few days, a different Japanese satellite of similar size is set to reenter Earth's atmosphere. And there are currently no concrete predictions as to where it will land. (Via Spaceflight 101)