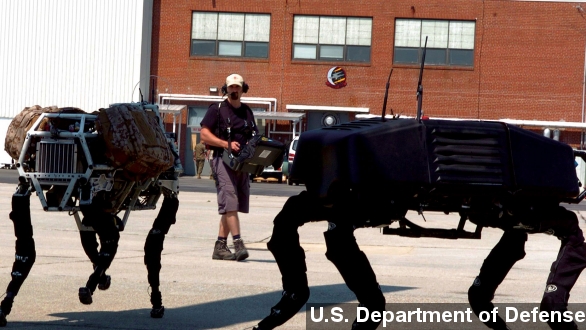 Google has acquired Boston Dynamics, makers of robots like BigDog and WildCat, for an undisclosed sum.

That means biped and quadruped robots like PETMAN and WildCat are now under Google's roof. (Via The New York Times)

Google announced the deal on Friday. Andy Rubin, the guy heading up Google’s robotics division, tweeted the news himself.

Boston Dynamics will reportedly complete its existing contracts — including the $10.8 million agreement it has with DARPA and the Pentagon to develop robots for eventual operation in disaster areas.

The Next Web points out Google is therefore technically a military contractor. But executives told The New York Times the company has no plans to seek further agreements on its own.

Google has yet to spell out exactly what it wants to accomplish with its new menagerie, but sources inside the company have suggested it will eventually give warehouse work, retail shipping and delivery a more robotic twist.

And Boston Dynamics is just the latest in a string of recent robotics acquisitions. In the last six months Google has snapped up companies that specialize in humanoid robots, computer vision and manipulative arms. (Via YouTube/Bot & Dolly)

Google has declined to give a specific timeline for any robotic projects. In an earlier Times article, Rubin described the initiative as a "moonshot" and outlined a 10-year vision.

But this time around he suggested Google's first commercial robots could show up within a few years, so who knows? One thing's for sure:

Soon, the robots that can run faster than any human could also know your Google search history. Just keep that in mind. (Via YouTube/Boston Dynamics)