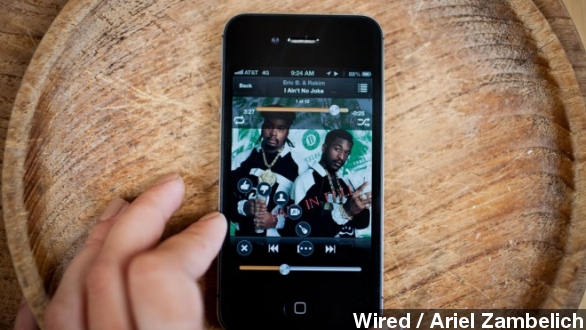 Google announced Friday its much-anticipated Google Play Music app finally made it to Apple's App Store, only a few months delayed and a few features short of the Android version.

Google's on-demand music streaming service for iOS allows users to store up to 20,000 tracks — from iTunes or wherever else — for free. That's, like, more music than anyone would ever need. (Via MobileBurn)

As far as design goes, a writer for 9to5Mac says, "Google's music ecosystem differs greatly from Apple's and more closely resembles Spotify or Amazon with a focus on the Cloud." ​(Via 9to5Mac)

PC Magazine adds, "The app has a mix of Google and iOS 7 flavor with swipable columns and Android-y cards." (Via PC Magazine)

Users can listen to songs backed up on Google's cloud. And if you really want to put it on cruise control, the app's radio feature mixes the songs in your collection with the same algorithm used for the All Access version.

All Access is, presumably, the biggest draw for Google Play Music.

For about $10 a month, you get unlimited songs and algorithm-based recommendations, and you can skip songs like crazy. That's just in case the algorithm throws you a curveball ... like Tay Swift on your "Get Crunk" station. (Via VentureBeat)

And it's ad-free, but the iOS version isn't quite on par with the Android version.

For one, the "I'm Feeling Lucky" radio station, which builds a playlist from your preferences, isn't there. So no music roulette just yet. And you can't buy new music through the app, nor can you subscribe to All Access through a smartphone. (Via The Next Web)

But, according to product manager for Google Play Music Brandon Bilinski, those things are coming, along with an optimized version for iPad.

Bilinski told The Verge the months-long delay was also for good reason. He said, "It just took us a little longer than we thought to bring it up to the level of polish expected from Play Music and iOS apps." The end result is an app with both AirPlay and Bluetooth capabilities.

Google Play Music is available in nearly 20 countries. That includes the U.S., the U.K., New Zealand, Mexico and Spain.